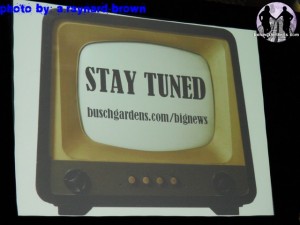 Event after event has led to the simple question: What’s coming next?

In 2009, Busch Gardens Williamsburg closed the Big Bad Wolf, their Arrow Dynamics Suspended Coaster and completely removed it, leaving little to no traces that a ride was ever there. After it’s removal, fans began to question what was going to replace Wolf. Different rumors have surfaced in the past, but Busch Gardens answered all the questions during a pass member appreciation weekend.

Our roving reporter headed out to the park to get the scoop on 2011. We soon discovered it was going to be a two year project along with a few other items and something new at Water Country USA.

Here’s a recap of what’s coming in the next two years at Busch Gardens Williamsburg and Water Country USA:

Check out some photos of the event and Howl-o-Scream street props.