Which park was the best of 2010? So many parks had great seasons with all new attractions and loads of fun. But which one do you think is the best? It’s a tough call on that as so many parks had outstanding years. So to make things fair we’re going on the playoff system! Each area of the United States have been roped off into regions, and the parks of that region will go head to head. The winner of each region will move on to the final round. We will not allow reveal the poll results until the finals. And don’t worry, we have two weeks to move through five regions. The final round will start the day after Christmas (Dec. 26th) and the winner will be revealed on Jan. 3rd along with a few surprises! Good Luck to all!

We took the parks of the South East and drew the lines from Florida to North Carolina (seeing that Carowinds borders two states, to be fair). 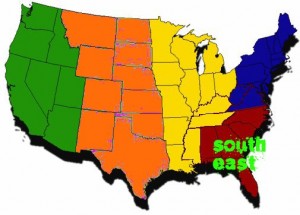