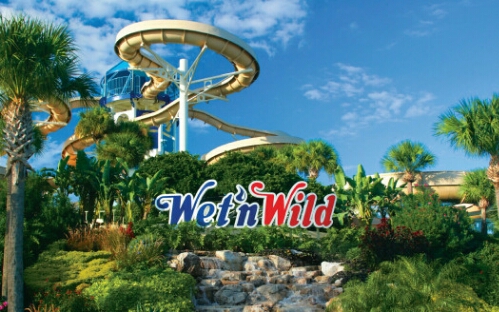 Wet n Wild, the granddaddy of all waterparks, closed on December 31st of 2016. That made it just shy of 40 years old. It was  the first of it’s kind, and ushered in a new era of waterparks. Since the park closed, demolition has begun, and rumors have been tossed around of all kinds. Today, Universal semi-confirmed the fate of the old location on International Drive and Universal Blvd by filing permits for a new 4,000 room hotel.

On Tuesday, the Orlando Sentinel , uncovered documents that show off plans for the new hotel. The hotel will be the seventh (and possibly eighth hotels on Universal Orlando property, though these hotels will be the first of the Universal hotels to not be directly connected to any theme parks.

The plans will take over the main portion of Wet n Wild, as well as the parking lot. The new plans also call for three parking structures in the hotels. It will also be taking over part of Precision Drive, which is a dead end road that runs from S. Kirkman, and ends directly behind the parking lot of Wet n Wild.

Let’s speculate a little here. The plan divides the hotel into two. We could see two separate hotels built on the property, which could explain the parking garages in separate locations. Universal could take the route that they did with Sapphire Falls and Roayal Pacific and use one of the hotel spots for convention center space. There’s also the rumors of second CityWalk taking over some of the area as well, with upwards of six restaurants and possibly even a new dining show experience.

While Universal’s parent company Comcast hasn’t been shy about getting 10,000 hotel rooms up for the current parks, the new hotel spaces are about halfway between the three current parks, and the new area that was purchased a few years back. Universal could poising for a central area between their current parks and what could potentially be a new park (or parks). With the central location, it would be a short cruise for buses or even a train, or cable car system.

There are no themes or even talks of themes right now, but knowing Universal and Loews, we can expect something amazing. The two partners have come up with some jaw dropping rooms in the past, and we can’t wait to see what’s next.