Hello,children. Please excuse the brevity of this particular article,as I am down with the flu and feel as if I have Sumo wrestlers sitting on each of my arms. I always seem to get sick when the weather changes. Maybe global warming will put a stop to that. One can hope. So, taking that into consideration, I have decided to fall back on that time-honored stopgap for the lazy columnist. The list. And since I am in a VERY bad mood today, I think it may make me feel better to rip into something and tear it to tiny little bloody shreds. So I give you my list of the top 5 LEAST favorite theme park attractions in Orlando. Ready to take a few cheap shots? Me too!

By the way,if In happen to insult about your own particular favorite attraction, please be aware that I don’t mean any malice, and I truly like and respect all of the folks who created these attractions, and I certainly don’t want to hurt anyone’s…WAH HAHAHAHAHA…nope, can’t do THAT with a straight face. Here we go. 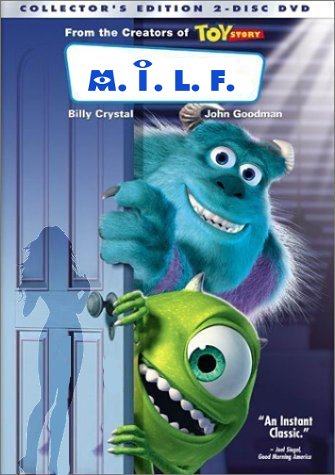 MILF is part of Disney’s so-called “Living Character Initiative”, which purports to allow the guests to interact and even converse with animated characters. It’s something that works quite well in Epcot’s “Turtle Talk with Crush”, so it’s quite a wonder that they managed to cock it up so badly here. The monsters are voiced by live actors situated backstage and watching the audience via cameras. They can tell crowd-specific jokes, and interact with the audience in a one-on-one manner. They don’t. I’ve suffered through this thing three times, and EVERY SINGLE TIME the monsters tell the exact same jokes and engage in the same tired banter. (If I hear that stupid-ass churro joke ONE MORE TIME…) This might be forgivable if the monsters themselves were state of the art animatronics, something I was really hoping for. They aren’t. They are,instead, realized by crappy CGI that I could outdo on this very laptop on which I type. They have painfully few animation routines,and you can actually see the herky-jerky switch between them, as the monster MC will freeze for a split second before entering into a new motion. If this were a video game, I’d take it back to the store. No, I’d burn it. My old Game Boy has better graphics.

This particular ride has always had a bit of a “WTF” factor for me, starting with it’s baffling location in the back left side of a Mexican restaurant. But at least it used to have a purpose, that being a (racially offensive, at least it would’ve offended me if I were Mexican) tour of Mexico. But then the dreaded “synergy” word reared it’s ugly head and before you know it the attraction was festooned with cartoon characters. Fairly appropriate cartoon characters, I guess, even though Donald Duck is about as Mexican as baked Alaska,and Jose Carioca is from Brazil…only Panchito, the leader of the bunch, is Mexican. But hey, south of the border is south of the border, yes? Well if you’re Disney,it is.Now hush and watch the natives dance.

The main problem with this ride is that the Disney characters have been shoehorned into scenes that were just fine on their own, and adding insult to injury the characters themselves have been watered down, to boot. For instance, Jose smokes cigars, and Panchito had a habit of firing guns into the air at the slightest provocation. No guns or cigars on THIS ride, amigo. The scenes portraying the history of Mexico have been replaced by scenes of a frenzied Donald Duck zipping around various sites in Mexico acting as if he just returned from a party hosted by Pablo Escobar, as if to say “Hey, Mexico is boring. Look at these cartoon characters instead! Aren’t they CRAA-AA-ZY?” as his friends get the short shrift, and are reduced to simply chasing after him and dragging him away from various temptations, including Mexican girls and snorkeling (?). It is interesting to note that even on a Mexican themed ride, the American character still gets the most attention.

The only part of the ride that remains untouched is the dancing doll sequence, a scene which prompted one internet wag to dub the ride “It’s a Third World After All”, which is way funnier than anything I could come up with. They even removed the opening Pepper’s Ghost effect, which was one of my favorite parts of the ride. Adding a final
touch of suck, the whole thing ends with a static, plastic statue of the Three Caballeros, which look for all the world like something you’s see standing next to a display rack in the Disney Store. Disappointing isn’t even the word, the entire ride has been stripped of it’s story and context and turned into just another way to sell Disney character plushies. Oh,and again, no animatronics. None at all. Gran Fiesta Tour is a sad, cheap, muddled, inaccurate mess that Imagineers should be ashamed of.

But it all could have been saved if they had JUST let that fucking rooster keep his guns.

Come on,you didn’t think I’d only pick on Disney, did you? I remember my first time on this attraction…I was really looking forward to it. I was imagining all kinds of coolness…none of which, sadly, showed up. Instead we get what is essentially a series of pre-shows looking for a ride. Room after room confronts you with TV sets featuring the expressionless mug of Bill “I have a board up my ass” Paxton, as he waxes monosyllabic about the power of an F5 tornado with all the enthusiasm of a thirteen year old girl thinking of giving up her place in the woodwind section of the school orchestra for punk rock. Helen HUnt also appears, tellingly not on the same screens with Bill…rumor has it she hated him so much she didn’t want to get near him, hence the separate screens. And honestly, who can blame her?

The attraction itself, such as it is, is a weak special effects show that tries the patience of even the most generous park goers. It begins promisingly enough, with a huge tornado appearing on a scrim behind the set, which rather convincingly destroys a drive-in movie screen and then bears down menacingly on the audience. Unfortunately when the tornado actually appears on the stage, it has devolved into a sad looking pillar of white smoke that would look far more at home being belched from the smokestack of a locomotive than passing itself off as an F5 twister.

Other slow-motion “special” effects include a truck on a stick that swings lazily across the set,a tree struck by “lightning” that splits into a tidy “V” shape…this happens all the time during real tornadoes, doncha know…and lest we forget, a flying fiberglass cow, complete with “MOOOO” sound effect. The best part of this attraction by FAR is the preshow room in which you wait to enter the main theater.

TWISTER was a great, popcorn good time at the movies, and there is in turn a great theme park attraction to be created from it. Unfortunately, this isn’t it. But, hey… we got COWS!

Islands of Adventure is a really great park. It was billed as “The most technologically advanced theme park in the world” and it was…in the late 1990’s. Now it’s getting a bit long in the tooth. Even so, IOA still has some awesome attractions going for it: Jurassic park River Adventure, Adventures of Spider Man, Dudley Do-right’s Ripsaw
Falls, and Popeye’s Bilge Rat Barges are all fine and, in a couple of cases, game-changing examples of their respective genres. And then there is Storm Force.

Someone must have decided that Marvel Super Hero Island needed another ride,and instead of coming up with something cool and unique, like, say, an X-Men danger room simulator, it was decided to plop and off-the-shelf flat ride in the empty space, where it simply did not belong.

Imagine the spinning teacups at Disney. Now imagine these cups devoid of their whimsical themeing, and instead saddled with an incomprehensible plot (something about powering up Storms’ lightning abilities by spinning in circles, apparently…because this happens in the comics ALL the time). Now imagine these cups made of something
resembling concrete, making them near-impossible to actually spin unless you are sporting Hulk-level strength. NOW imagine being shouted at by an angry lesbian while you are struggling to spin this concrete bowl in which you sit.

Congratulations! You now no longer have to ride Storm Force. 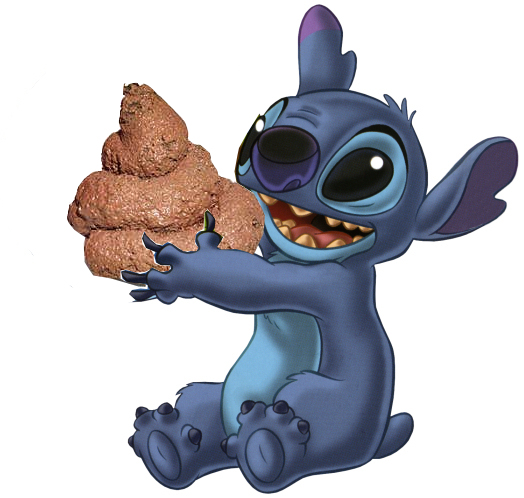 I’ve saved the worst for last. There are a three basic reasons why I might hate upon a particular attraction. One, if said attraction has replaced a superior one. Two, if the attraction insults my intelligence, and three, if an attraction just plain has no reason to exist. I am unhappy to say that Stitch’s Great Escape fills all three criteria.

You know how I have been carping on other attractions for not including animatronics? Well, Stitch’s Great Escape proves beyond a shadow of a doubt that animatronics do NOT guarantee a good ride. How disappointing is it that one of the most advanced pieces of robotics technology in the park has been designed not to entertain and amaze, but rather to belch, spit, and fart? In a not-as-rare-as-they-used-to-be misstep, Disney has replaced whimsy with Nickelodeon-esque body function humor…because nothing is funnier than a FART, right kids? Hence, Stitch, a character that exists, it seems, solely to expel intestinal gases and excrete bodily fluids. I wouldn’t have been at all surprised if the little bastard had decided to jump on top my head and take a dump.

Further, I will never forgive this attraction for replacing my beloved Alien Encounter…and it is even MORE galling to see how the same show elements being completely turned on their head. The sinister S.I.R.
from the AE preshow has been re-jiggered from a sadistic villain into a comical “fat” robot police sergeant who jails cute fuzzy aliens for stealing pastries. I couldn’t make this stuff up, folks. But the biggest sin this attraction commits is it’s complete lack of any sort of dramatic resolution. Where it should be building up for an exciting climax, like Alien Encounter before it, it just…stops. Literally. Stitch escapes the chamber in which he is held, spits at the camera,of all things, and that’s all folks. Even the cartoon characters are at a loss, as they all just sort of shrug their shoulders and give up. THIS is Disney’s idea of a storyline? I thought these people were storytelling professionals, man. Just when you are expecting an exciting climax, you instead get a big green loogie dripping from a camera lens. I wish I was making that up.

This is what happens when you let focus groups design your attractions. Total crap.

Well, gosh, I sure do feel better. Come back next time and I may actually write ABOUT something. Maybe.

Dish out your favorite turds in the forums!