Whale birth results in death of calf and mother

Two killer whales at Seaworld Orlando were impregnated by their largest killer whale, Tillikum. Katina, who had the first successful whale birth amongst the three Seaworld parks in 1985 is due to have her sixth calf sometime in October. Taimia was expected to give birth to her fourth calf sometime this month. 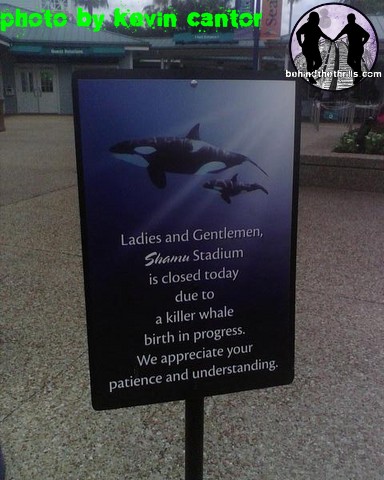 Upon arrival to Seaworld Orlando today, guests were informed by a sign at the front of the park that Shamu Stadium would be closed today due to a killer whale birth in progress. Sorry, Folks! No Believe or Shamu Rocks today.

However, it is quite unfortunate that I learned this evening, the birth was not successful. The calf was still born and 20 year old Taimia passed away during the birth. This is very unfortunate for Seaworld and a very sad moment.

Another calf is due sometime in October. Let’s hope nothing goes wrong in October, as that would be very unfortunate to happen again. My deepest condolences to Seaworld and their killer whale population.