The horror music group Midnight Syndicate is known for composing the soundtracks for your inner most fears, and the film that is your nightmares. Now they are known for making movies that fit the soundtracks as Midnight Syndicate Films presents “The Dead Matter”. The three DVD set hits Hot Topic stores this Friday, and includes not only the film, but the films original soundtrack as well as a retrospective called “Halloween Music”. Luckily, we were able to get a sneak peek at the film.

This is the first film by director Edward Douglas, who wrote the script as well as produced it. To say he has a full plate here is an understatement. Did I mention he also scored the soundtrack? Moving on. The film stars Sean Serino (most notably from the Rage) as Gretchen, a young woman who is grieving over the death of her brother. She and her friends find an ancient amulet that has the power to control the dead. The amulet is also being sought after by the evil Vellich, played by Andrew Divoff (most notably Mikhail from LOST and Wishmaster) who wants to use it to rule the living. They must find a way to stop Vellich, and save the world from vampires and zombies. The film is produced by Robert Kurtzman and also stars Jason Carter of Babylon 5, Horror legend Tom Savini, and Christopher Robichaud who played in the original short film of which this is based. 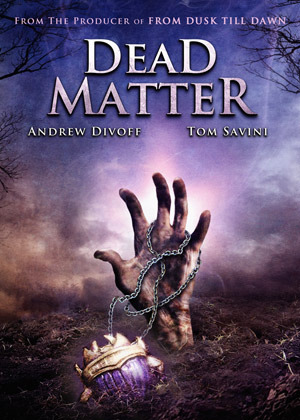 We open to find Vellich just wreaking havoc on a German town with an army of zombies flocking to him by use of the Amulet. The vampire hunter Mc Callister is doing his best to stop him. When he does the zombies just fall. After all, Vellich is controlling the dead. The story moves to Ohio where we find Mc Callister and Mark trying to find the one spot that can destroy the Amulet. Of course, Vellich is right there. Mark hides it right before Vellich kills him, and Vellich himself is chased away by spirits.

We move on to Gretchen and her boyfriend Mike who meet up with their friends, one of whom happens to work for a local pharmacutical company that just made the greatest diet formula known. They hold a seance in the field where Vellich and company were, and find the amulet, a strange type of purple glowing Scarab. Gretchen puts it on and they continue trying to connect with the dead. Strange things happen, and Gretchen wakes up to find that she had been dreaming, but the scarab is still around her neck. This is where she meets Mark, the dead guy, who is now a zombie at her beckon call.

From there the rest of the gang convinces her that she can’t bring back the dead, her brother isn’t coming back, and uncover another use for the diet formula that the company has produced. Meanwhile Vellich is trying to track down the scarab, and goes to get help from another vampire warlord (Tom Savini as Sebed) who is using this drug to control the vampires.

Without going much further, Gretchen and her friends have to face Vellich and company.

Overall the film was very cool. It hearkened back to an older style of film where we didn’t necessarily see someone die. It was more implied gore where you see the camera pan off screen and then the person is dead, where a lot of films today are not shy about slapping on the guts. Only one scene did you actually see someone get gored up. Today’s zombies are all about death and dismemberment, but originally they were just kind of there. They scared the hell out of you because they were dead! They were also slaves. That’s the exact feel that Ed was going for here. The scarab controls the dead, the dead do your bidding, everything from kill that pesky vampire to have a drink with you. It’s an old take on a popular monster. Speaking of old takes, Vampires in recent films (and tv) have different meanings. They sparkle in the sunlight and try to fit in with everyone else by drinking manufactured blood. They’re not scary, they’re glamorous! The Dead Matter Vampires want to eat you. They can’t go out in the daylight, they can’t see their reflection and they are repelled like roaches by holy relics such as crosses and holy water.They’re vampires not metaphors. The movie was also shot on film! It wasn’t digital like so many are today. It shows in places, especially in the age of Blu-Ray upconverts, but it does give an old feel to the film. 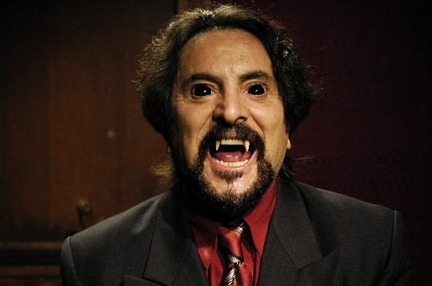 Unfortunately the film is not perfect. I wasn’t a fan of Gretchen, and Divoff’s Vellich felt like he was going through the motions with a white wig. Also the story seemed to jump around a bit and left a lot unanswered. But perhaps the biggest problem was Savini. There just wasn’t enough of him! I would loved to know more about his “gangsta ass” Vampire warlord Sebed. He really looked like he was having fun with the part, and it would be fun to see his story.

Still, the film was a ton of fun. If you are a fan of Midnight Syndicate you’ll see a lot of Easter Eggs hidden through out the film, most of which had me chuckling, such as a few song titles for characters. Even if you’re not a fan of the band, the film is fun and not all too scary. Kurtzman’s effects team does a great job with the effects. The DVD also has some great extras such as “Fun with Mark the Zombie”. Pretty hilarious. Also there are some commentaries as well as a making of feature that plays in the movie while you watch it with a Picture in picture type deal that shows concept art, and interviews.

With the 3 Disc set you also get two music CD’s showcasing what Midnight Syndicate is known for. The first being “Halloween Music”. All your old favorites are here, plus some that you may not have heard before as they are extremely hard to find. For any fans of Halloween Horror Nights, one track is mysteriously missing. Carnival of Carnage could still be used on a long rumored HHN exclusive disc.

The other CD is the Dead Matter Soundtrack. This is a lot different from the “Cemetery Gates” which was released before this film. The soundtrack contains all original scores from Ed Douglas as well as a few Midnight Syndicate remixes and some very moody songs from a few bands. Most soundtracks have compilation of music from artists that may or may not be used in the films. Every single song here was in the movie. As said before Ed composed the scores himself. Very rarely on the soundtrack do you say “Hey that sounds like Midnight Syndicate!”. It sounds like a different composer, which is a good thing. You can distinctly hear Midnight Syndicate in some of the scores, but mostly you hear someone you’ve never heard before. You hear influences of Herrmann, Skinner, and even some John Williams. It shows that Ed, as a composer is growing which hopefully means this directing gig isn’t going to his head and we’ll get even better Midnight Syndicate music, with Gavin right pushing the boundaries like he did with the vocals in “Lost”.

The set goes on sale at Hot Topic on Friday(7-30) or you can order online by clicking here.

Also don’t forget you can chat live with Ed and Gavin this week on Behind the Thrills!