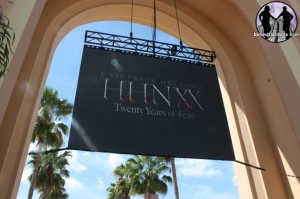 The final touches are being made all around Universal Orlando as the park is getting ready for the opening night of Halloween Horror Nights 20: 20 Years of Fear. The stages are all set, the smell of fake fog and plywood is lingering in the air, and the only thing that’s missing is the sounds of saws and screams.

While it still seems some final touches are being made to the front gate, the LCD’s are being hung and even a few video cycles are being tested. Most notably, the double X’s from the lantern and a soft lantern glow coming from behind.

Meanwhile, elsewhere in the park, Rockit is still down. You may recall that Maurer and Sohne issued a release urging all parks with the “X-Car” Coasters to shut down immediately due to faulty couplings that are showing signs of failure. Universal has said they already have fixed the problem, and it is down due to other maintenance, according to the Orlando Sentinel.

A curious tidbit however, there are Rockit shirts in the clearance store in the park. Not an abnormal thing as new shirt designs are released all the time and the old ones may not be very popular, but it is just a ominous sign, albeit not a correct one.

The only thing we can really see of Horror Nights throughout the park are the streets, though this year, it’s a lot to see. The streets are literally littered with props and sets for the different scare zones. Bill and Ted’s sign is up, and everything just has a feel of anticipation. We found ourselves looking at things and scratching our heads in wonder at what they could possibly use them all for. The strangest zone of all is the “Fear Revealed”. It’s just two large X’s and a few small stages for the past icons. Unless it’s added in the next few days, the rumor about a stage type show for Fear Revealed is going to be busted.

Someone pointed out on another site that Mardi Gras is literally translated to Fat Tuesday. So does that mean that Zombie Gras is “Fat Zombie”?

Horror Nights kicks off Friday night and we will be there, so make sure to follow us on Twitter for all the latest updates.

For tickets and pricing on Halloween Horror Nights visit their official site!