Fear has a face.. and a branding iron! 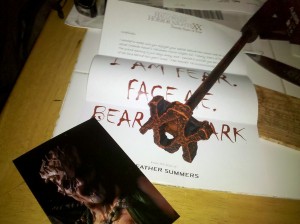 Two strange packages arrived at my doorstep today, addressed to my husband, Erik. We sat down and opened the first, which contained a Universal Orlando thumb drive. On this thumb drive, Heather Summers takes us behind the scenes and begins to show us how Horror Nights is created until Fear takes over her.

Upon opening the second package, we were lead to another box. A wooden bloody box with the Halloween Horror Nights logo carved into the top. Upon opening it, we had three items to examine. The first was a letter from the desk of Heather Summers, who was following up to ensure we enjoyed our behind the scenes look at Halloween Horror nights and she also wanted to provide us with an image of “the force behind this year’s event”. Again, Fear takes over and this time he wants us to face him and bear his mark.

The second item in the box was a photograph of Fear. Fear is a demonic looking creature that appears to have wings. His head is covered in bulding veings and he bears the “XX” mark on his chest, just like he wants us to.

Fear has given us a branding iron with an “XX” at the end and the Halloween Horror Nights logo carved into the handle. Fear has given us the tools we need to bear his mark. Fear lives deep inside each and every one of us.