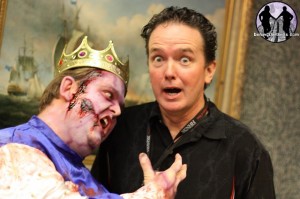 Halloween Horror Nights 20 is my seventh year attending the event. I’ve seen it from quite a few sides, such as from a guests standpoint as well as from the media standpoint. I’ve never seen it from the standpoint of the scareactors. It’s something that I’ve always toyed with but seeing that I live a few hours away from Orlando, and that I actually have a day job (yes, writing hasn’t paid off just yet) it’s something that has always been just a tad out of reach. Knowing a few of the actors at the event personally, and hearing their stories plus seeing them at the end of the haunt season as they’re exhausted and a little saddened has already given me massive amounts of respect for what they do. So when Universal invited me the chance to attend “Boo Camp” I jumped at the chance.

As we drove to Orlando we pondered what the scare zone might be. After all, it had to be a make up based scare zone given what I’ve seen in years past. Plus it was doubtful that normal everyday folks would be given a chainsaw, after all running a chainsaw can be a dangerous thing, and the majority of a lot of folks have never really touched a chainsaw (I’m in the minority as that is a huge part of my day job) let alone come in contact with park guests while trying to scare them. The combination could be disastrous! There was really only one logical conclusion…Zombie Gras.

As we were lead into Lombard’s Landing to have our make up done and to get tips on how to scare and what to expect, we could see the preparations for Zombie Gras being made. We were greeted by Mike Aiello, Director of Shows for Universal Orlando and part of the team that makes HHN possible.

“Literally thousands of people make up this event, and tonight you’re going to be one of them.”

So much goes into the event, from hiring the actors, to creating the houses and zones and even costuming the actors and make up. A lot of attention is paid to detail, and every single actor is very enthusiastic about the role. Of course, when you’re a zombie, it’s hard not to be.

In a zone like Zombie Gras, make up is key. Universal employs some of the best in the business to help not only apply the make up but to help design the look of several characters. Michael Burnett was the guy “designing” my character. Burnett has been with Universal Orlando for seven years as a Make Up Designer and not only does he do work for Universal Orlando, but he has also done work on over 100 films and T.V. series including, Evil Dead 2, Buffy:The Vampire Hunter(T.V. Series). The list seems to go on.

To say the guy knows what he’s doing is an understatment. So it was time to get me in the chair. Michael started by adding a prosthetic appliance. When you hear the term you probably think of someone’s artificial limb. It’s pretty much the same thing. Prosthetic is pretty much anything that is not your real body part. In this case it was a piece of skin molded to look like it was ripped from my face and just hanging there. Universal uses these as well as masks and traditional make up.  Another technique that is used is airbrushing. Just as you would expect in model cars, Airbrushing takes thinner make up and sprays it on various body parts. It saves a lot of time on the process, and can make doing big areas (such as shading) go a lot quicker. Also it gives a finer point that most brushes use, and uses less material than sponges and cuts on the cleaning time in between colors.

As you can tell by some of the pictures, I have a lot of hair, so Michael suggested that I use a hat or some other prop to keep it up. The only thing that could fit my big head was a crown (as if my head needed to be any bigger).

“How much we use depends on what the event calls for” Michael added “With this event, we use gallons of blood.”

I was in the make-up chair for roughly 20 minutes, but it’s not uncommon for actors on movie sets to spend hours. Boris Karloff spent 4 hours a day having the make up applied when he made Frankenstein. In an event like HHN, the less time spent in the chair, the better as there are thousands of actors that need make up every night.

The make up isn’t the only thing that completes a character. Sometimes your character needs just a little extra something to help you along. In the Zombie Gras zone there are musicians wondering around with trombones, it adds to their character and makes the part more convincing. So I thought it would need to be for me, and I chose a half eaten hand. What else do you give a fat zombie? It’s convincing, and judging by my size, completely believable that I would gnaw on someone’s hand for a while.

As the rest of the group readied their make up and props, we were given direction on what to expect and how to handle things. Being a scareactor is all about expression and making the character your own. We were zombies, and through the years there’s been many different schools of zombie invasion. From the Romero version of the slow ambling zombie that does more damage in numbers to the zombies of 28 Days Later and the Left 4 Dead gaming series that run to attack. Both can be scary and both can be fun.

The biggest tip that we received was to not linger too long. You are invading a persons personal space after all. If you’re mean and scary, it can be a huge reaction to come up with the hands. So the way that most actors seemed to get around it was to start slow, then run in for a pounce and back away quickly. The guests are not supposed to touch you, and scareactors are definitely not allowed to touch guests. It becomes more of a challenge if you become a popular character and people crowd you and even more so as the night goes on and people go on with the drinking.

Being finally released to go nuts on the crowd, I chose the slow and confused approach. Ambling along and looking like I’m lost drew a lot of people in, just as they came in, I pounced. Sometimes I growled, sometimes I simply stared. Most of the time I produced either great scares, or laughs. The scares though, are the best.

I really have to give some big props to the normal cast of the zone, they have made the event their own, and it seems to be a crowd favorite as dozens of people flock to it at all times. A really cool detail that most people don’t know is that there is a parade float in the zone with a lone actor on it who occasionally throws beads. Tip here, he isn’t throwing them at you, he’s throwing them at the approaching zombie to try and chase it off. It makes for a great scare too. Countless times I would may way up to the float where a flock of people were waiting, the actor would toss the beads and as people scrambled in I would charge and get the element of surprise.

Scaring even gives you some kind of primal satisfaction as well. It feels good when a person shrinks back from you in fear, or even better runs. Something about when a person runs seemed to ignite something in me that made me naturally want to chase. One poor lady scooped down to get beads in front of Disaster, and when she came up I was waiting. I chased her all the way to the bathrooms, and she kept running.

The other fun thing about it was not knowing what to expect. I would get in the faces of little kids I’d expect to cry and they would wave. Or I would creep behind one of the biggest of guys only expecting to be made fun of and I would turn him into a crying little girl. People are completely different, and you find out how different when you turn out the lights and get in their faces.

Since this was a zombie zone, and zombies are living impaired their brains sometimes tend to retain certain things. So it would be with the music. I would get a good beat going only to act confused. Zombies can lend to a lot of comedic relief, and seeing that I was a fat zombie with a crown, scares weren’t always on the menu. Inspired by the pirate mime at Sea World I would mimic those whom I expected wouldn’t scream. I would offer my hand as a snack, and even playful bite towards people. Countless cries of “Hey Burger King!” would see me raise my hands and do what someone else called “the Whopper Dance”.

But being a scareactor, even for a night means that you experience just about everything a real scareactor gets to experience, and that includes the downside. With many people in the area, including a lot of teens who always seem ready to show off for their friends, it became a challenge to do the job. Sometimes people just leave their brains at the front gate, and think that just because they pay for an event they are entitled do whatever they want. Sometimes alcohol serves as liquid courage and makes people act a little more aggressive than they normally would, and forgetting the rule about personal space. There were several times when I felt fingers in the back with people either trying to get my attention to take my picture, or to do something insulting. The tough thing as a scareactor is just to move on and away. I’ve gained even more respect for the scareactors who go out on a nightly basis and do the job, and even put up with the occasional disruption.

By the end of the night (and I only did a short hour) I was ready to pass out. When you’re out in the zone getting scares you get a huge adrenaline rush. Once you stop, however, it leaves you wiped, or at least it did for me. It is was an amazing experience, one that is seriously making me rethink my career, and one that I hope I have a chance to do again soon.