Discovery Cove adding “The Grand Reef” and SeaVenture experience in 2011 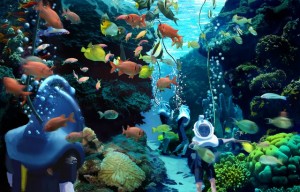 Seaworld Parks and Entertainment has a lot of new attractions planned for 2011 and 2012. Last month, Busch Gardens Williamsburg announced they would be building a drop tower scheduled to open in 2011, and a new roller coaster scheduled to open in 2012. On top of that, they announced that Water Country would be adding a new slide – Vanish Point. Today, Busch Gardens Tampa announced their roller coaster, Cheetah Hunt, and animal exhibit, Cheetah Run. Now it’s Discovery Cove’s turn to announce their 2011 project “The Grand Reef”.

Besides swimming with Dolphins at Discovery Cove, guests will be able to explore even further with The Grand Reef. Guests will be able to swim in shallow or deeper waters, relax in hammocks on white sandy beaches or snorkel around canyons that were inspired by reefs around the globe.

Guests can choose whether to stay in shallow waters and discover sea-life just below the surface or explore even further as snorkel as fish and Rays swim around them. Families can also play “hide and seek” with tons of beautiful fish and rays, as well as feel as if they are swimming side by side with sharks and venomous lion fish. Guests will be separated from the sharks and lion fish by glass.

Along with the expansion of Discovery Cove, they are also adding SeaVenture, an underwater walking tour. Guests will gear up and walk along side the sharks and venomous lion fish (again, protected by glass). Guests will be surrounded by schools of fish as they explore the floor of the sea. This underwater expereience is available to Discovery Cove guests for around $59.

The Grand Reef is scheduled to open in 2011. For more information about the The Grand Reef, SeaVenture, or Discovery Cove, visit www.discoverycove.com.

Check out the concept art of The Grand Reef. Photos courtesy of Seaworld Orlando.