In October of 2010 we introduced weekly polls in which you, our readers, theme park fans, and coaster enthusiasts could choose your favorites in the theme park world. We went from the traditional (Best Park) to the off beat (Friendliest Crowds) to the just plain weird. In the end your votes were what counted. Some parks got in on the fun and promoted their park, and urged their Twitter and Facebook pages and it became a contest to see whose fans loved them the most. The results, while not always unexpected were always surprising. So without further adieu, we present the Best of 2010 as picked by you, Behind the Thrills Readers. 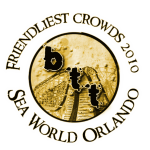 Friendliest Crowds: Sea World Orlando-The one main drawback to any theme park are the crowds. Disney may be the “Happiest Place on Earth” but you’d never know it from the miserable amounts of people, and the two and three hour waits for the majority of the lines. So which park made for the best crowds? Sea World Orlando. Most who we asked all said the same thing, everyone at Sea World seemed so relaxed. Maybe it’s the calm of the ocean, or maybe it’s the fact that there’s not people going crazy for costumed characters. Congratulations to Sea World! 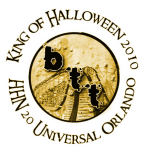 King of Halloween:HHN XX 20 Years of FEAR-This was a big year for Halloween in general. From the “Amped up” terror of Sylvie at Howl O Scream, to Netherworld’s in your face fear, to “No Place is Safe” at BGW. In the end, it was HHN in Orlando that took the crown. The event was touted as the best rated event ever by Universal Orlando. Crowds grew to massive levels and creative teams took a look at their past while forging ahead with “A new age of Darkness”. 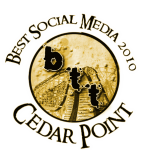 Best Social Media: Cedar Point-Sometimes it’s not what you say, it’s just how you say it. Cedar Point isn’t as well known for their online presence when it comes to doing things like constantly updating on construction or giving free stuff away like other parks, so it came as a huge surprise when Cedar Point ran away with this title. It comes down to one thing, Cedar Point loves their fans and the fans love Cedar Point right back. 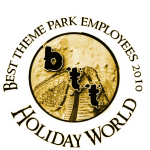 Best Theme Park Employees-Nestled in America’s Heartland is Santa Claus Indiana, the home to Holiday World. The park is well known for their great coasters, their inexpensive prices, free refills and great employees. A big ground swell of support came from fans. 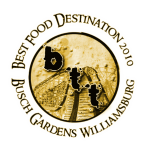 Best Food Destination:Busch Gardens Williamsburg-Long gone are the days of just hot dogs, funnel cakes and candy apples. Today’s theme parks offer varieties of foods from the standard favorites to the gourmet new dishes. BGW takes the theming of their park and works in culinary delights from all over the world to match each area, making it not only the best food but the best food destination period. 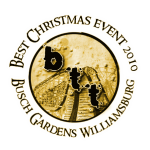 Best Christmas Event: Christmastown Busch Gardens Williamsburg-It came down to a single vote, and almost became the upset of the year when Gaylord Palms ICE! and SNOW! fought to the bitter end. But in the end it was Christmastown that took home the title and “Santa’s Pride”. Christmastown gives guests the chance to see BGW in a whole new light, however weather does play a major factor and not all rides are always open. In fact there were several days when snow prohibited the park from opening at all this year. Still lights, shows, and the spirit of Christmas reigns supreme. 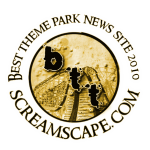 Theme Park News Site of the Year:Screamscape.com-We had dozens of sites submit their names for Site of the Year, most of which didn’t read the rules. Most sites were park specific, others had been around for less than a year, still some others haven’t updated in months. We’re sorry we couldn’t nominate you all. But in the end it didn’t really matter as Screamscape took the crown and held it up high daring anyone else to come close. News, rumors, contests, and a wide variety of parks is what fans have come to love over the years as Screamscape Editor Lance dishes out a daily dose of what theme park fans have come to expect from the giant. 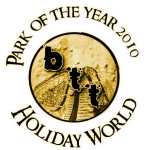 Park of the Year:Holiday World-What a hard, but great year the park has had. The loss of Park President Will Koch came as a shock to not only the family and staff at Holiday World, but also as a shock to the rest of the Amusement Industry. Still the park pressed on carried on just as it has for the past years, putting customers first and developing a fanbase that rivals even the biggest of parks. The park shows no sign of changing their reputation anytime soon either. In 2010 the park opened Wildebeest the worlds longest water coaster. In 2011 they plan to release the all new Timberliner Trains for their signature coaster, the Voyage. In addition, there will be an all new Spinning Sleigh ride. Just what Santa needs after all those milk and cookies. 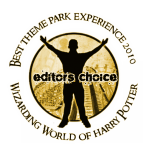 Editors Choice:Best Theme Park Experience:The Wizarding World of Harry Potter-Editors Choice is an award that Behind The Thrills gives based on overall experience, customer service and innovation. This year we’ve given the honor to The Wizarding World of Harry Potter at Universal Orlando’s Islands of Adventure. Since the area has opened it has been a boon to the park, with attendance up over the previous years and sales through the roof. For the first time in park history the gates have had to be shut due to capacity….several times. Besides the push in attendance, the area boasts one of the most technologically advanced thrill rides ever to be imagined, and unlike anything the world has ever seen. On top of the rides, the park has managed to capture the overall atmosphere of the park with not only the feel of the shops and restaurants but one thing that must cross every first time visitors lips, Butterbeer. The Wizarding World has set a new standard for themeing and attractions, one that won’t be matched for quite some time.

Congratulations to all the winners, and thank you to all who have voted. Did your favorite park win? Let us know in the comments below. Be sure to be on the lookout for more polls throughout the year, and official “Best of” Voting to start in October.