The new blog will feature stories from all areas of the park, including animal training, engineering, entertainment, horticulture, culinary, merchandise and more. It will also focus on providing behind-the-scenes details and other unique content that can’t be found on the park’s .com site.

“This portal is a place for us to regularly share information and create a two-way dialogue with current and future guests,” said Busch Gardens’ Vice President of Marketing, Gerard Hoeppner. “The launch of this blog is a social media milestone for our new Digital Marketing team.”

Busch Gardens’ digital presence also includes a growing fan base on Facebook and Twitter, as well as a YouTube channel and their Busch Gardens .com and .org sites.

Meanwhile today Busch Gardens Tampa announced that the Serengeti Express (the train that goes around the park) will be closed Monday and Tuesday this week to make room for Cheetah Hunt Construction. Speaking of which, this thing is just going up faster every day. More work is starting to be done on the old Skyride station, a lot of the surrounding shops are being closed off and demolished, and Cheetah Run looks like it’s starting to come together. The coaster itself looks pretty close to completion and with any luck should be finished with construction by the end of February. Of course, that would just be the coaster itself, and doesn’t include the rest of the attraction.

Speaking of the rest of the attraction, it would seem like this picture is the beginnings of a pop up. Maybe not? 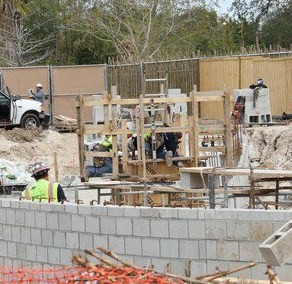 Throughout the rest of the park, and the rest of the Orlando park area, it’s Brazilian tour group season. While the parks definitely are not at capacity, it’s still fairly busy. The biggest line in the park is of course for Gwazi and the new Millennium Flyer trains. Reports are starting to filter in from all over the geek world that Gwazi was given the breath of life and loads of people are flocking to check it out. Let’s Dance featuring the ultra hot and ultra talented “Burn the Floor” has started it’s run and signs are everywhere for it.

And now, look at the animals and go awww.