Greetings, you may call me….keeper for I am the keeper of tales. For those of you that don’t know, your pal keeper has been going to dinner shows in this town for much longer than he’d care to share. Ablely assisted by the lovely Mrs. keeper and later on the lil keeper we have moved a-l-l the way down and cheered on all manner of knights, cowboys, gladiators and even samurai as we’ve seen shows come and go in this competitive market. We’ve eaten bad cafeteria food and watched local talent try to rise above scripts that seem written by 4th graders. We’ve also seen a few gems peak above the mediocrity to really entertain although most muddle thru the middle ground and somehow still stay in business (and yes I’m looking at you Arabian Knights).

The thing that has been missing in the mix since the short-lived Fiasco’s pulled up stakes has been a variety show format. It’s one of the hardest to get right because you are at the mercy of your individual acts. If you have a great novelty act, it works and if not it falls flat. This means booking and re-booking which changed the dynamics of the show. Sometimes, just like in theme parks, what you end up with a couple years down the road is nothing like what was envisioned by the creators. The variety show format means that the themeing and characters that hold the show together have less stage time and have to be very strong and powerful or else you just have some entertaining ACTS but you don’t have a SHOW. This was my impression of both King Henry’s and Fort Liberty great acts—but with very little glue to hold them together.

Imagine you want to put together a new show in town. You have experience in running a dinner show, you have the infrastructure in place so all you need is something DIFFERENT, something to distinguish you from the others. You do your homework; you know what has worked and what hasn’t. Imagine taking the variety show theme from King Henry’s, the room layout from Sleuth’s, the period themeing from Pirate’s, the singing and stage work from Capone’s, the comedy from Comedy Warehouse and Adventurer’s Club, and the food from a fine dining restaurant. Sounds like it has all the makings of a train wreck right? How could these elements pull together to make anything except a poor imitation of what we’ve seen time and time again. But somehow when you add all this in a pot and stir in some classic Burlesque to hold it all together, it creates an experience that is not only unique but as entertaining as any that have come before.

This past year Treasure Tavern opened up in the Pirate’s Dinner Theatre complex and thanks to a super 50% off special going on thru March we were able to brave the tourists once again to check out this new show. We parked in the back of the Pirate lot and found the Tavern had a separate box office and entrance on the side of the building from the main entrance. We entered thru a gated courtyard that seemed a bit more upscale than it’s swashbuckling sister. After getting our tickets we were escorted into a room where we met Miss Gretta, the big and brassy proprietor of the tavern and her jewels and took the obligatory dinner show entrance photo. I’m happy to report that after the photo was taken we left the traditional dinner show trappings behind only to become completely mesmerized by the offerings inside. The room was in rich dark tones, with fancy candle lit table settings at the tables. A small size by dinner show standards, maybe 200-300 people capacity as opposed to the barn size shows that hold over a thousand. Again the size and class helped with the atmosphere and tell us we were in for a different experience. There was a stage in front and a bar in the back and NO GIFT SHOP IN SIGHT ANYWHERE. Dare I say, the makings of a dinner show for those that don’t like dinner shows.

We were escorted to our table by our jewel for the evening. Miss Gretta has outdone herself in this department as our jewel/server/chorus girl sashayed the way to our table I noticed that all the jewels seemed to be of model quality. Now friends, let me tell you that for your pal keeper, these things are rarely even noticed but I must admit that each and every jewel in the tavern was very precious indeed. But beneath the superficial shine was an inner talent that really kept held the evening together. They were personable, attentive, and amusing from start to finish. While sipping our complementary glass of rum punch some traveling entertainers came by our table to introduce themselves. This trio of con artists showed up throughout the show in addition to doing their own improv numbers.

When the Tavern was first opening I read a rumor that said it was going to be 18 and up admission only. Not sure if that was bad info of if things changed after they opened but when I inquired I was told it’s recommended kids be 13 or older. Now the impression I got was they were still going to be happy to take your money but I didn’t question further as our daughter was well past that age. Let me caution parents or those easily offended, this is NOT the show for you. It is very PG-13 at least and they pull no punches in this department. As a matter of fact it ends up being part of the charm. In a market full of the sanitized, squeaky clean, versions of medieval jousts, Arabian courtships, fun-loving pirates, and wise-cracking mobsters Treasure Tavern gives us a C-cup overflowing with the tantalization and bawdiness of Burlesque. Now, like the others, it may not quite be authentic Burlesque, but it’s a 21st century version that I feel at least has the FEEL of authenticity to it. I don’t want to spoil some of the very funny production numbers by giving their titles but lets just say that the drink of the night (and I imagine every night) was the blue ball—nuff said.

In addition to the regulars there were six variety acts, a juggler, a hula-hoop act, a balance act, a comedy magician, a Russian acrobat couple that I swear were having sex on stage in front of us, and a quick change act that was nothing short of amazing. Once the main show began there was only a brief 5 minute break at the beginning of the main course, this was a solid, non-stop, full, two hours show. If that’s not enough, may the entertainment gods bless them, they used LIVE MUSIC. If for no other reason they should be supported for this rarity in dinner shows. Just a keyboardist and drummer but such a difference from the canned stuff that is the norm.

The food was on par with a fine dining or cruise ship fare. The three course meal was table side tossed salad (a whole production in itself), with a main course of prime rib, asparagus, potatoes. The evening was capped with a fancy opera cake for desert. When we went there was also an option for a beef medallion that was available only at the box office. We all had that so I can’t comment on the quality of the prime rib but I heard no complaints and our beef was excellent. The only caution in this department is to remember that this is not your father’s dinner show so different rules apply. This is a tavern and tavern’s are for drinking. Besides your one complementary rum punch you get no drinks you do not pay for. No all you can drink beer, wine, and soft drinks. You get bar service or ……bar service. If you want a Coke with your meal you buy a Coke and if that Coke runs out… you buy another. I can’t say they were deceptive with this, but they did little to point it out. Not a horrible practice by any means but when the sticker price is $70.98 a head including a gratuity they add in at the box office, I’m not sure that springing for an ice tea or Coke would break their business model. I guess those musicians are pricey .

Seriously though, there was a lot of value on the stage and just by sheer numbers I’m concerned that the entertainment payroll overshadowed the revenue the night we visited. If that is an indication of a regular night than I fear that we will soon see less entertainers and the erosion of this experience. Please my friends, before its vision fades, go out of your way to take a visit to this tavern and see the true Treasure it holds.
If you wish to venture to the Tavern, check out the official site.
Every Day’s An Adventure
Keeper 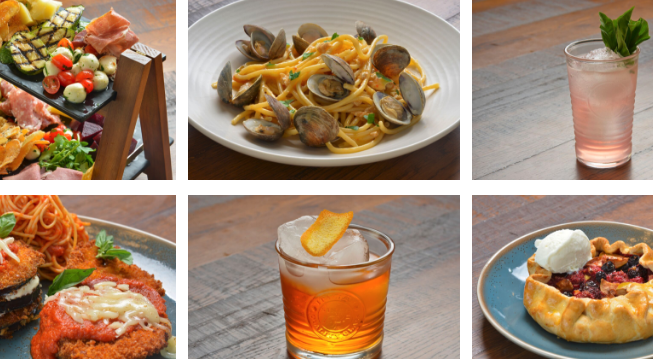