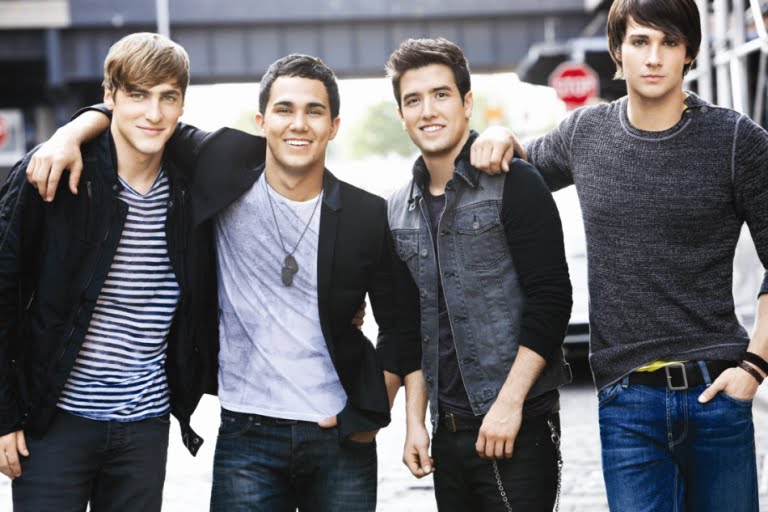 Long after the concerts of Mardi Gras subside, and before the summer crowds hit Universal Orlando will rush out with one of the hottest things on the radio and television. Big Time Rush, the boy band with the show of the same name will be performing a special concert on May 14th. On top of that, there will be a special sneak preview of their latest episode just for those who attend the concert that day. Here’s the info from Universal:

On May 14, Universal Orlando guests are in for a big-time treat – Nickelodeon stars Big Time Rush will perform live at Universal Studios Florida’s Music Plaza stage.

With millions of fans all over the world, Big Time Rush is one of today’s hottest names in music and entertainment.  Nickelodeon’s hit series “Big Time Rush,” produced in partnership with Sony Music, stars Kendall, James, Carlos and Logan, as four best friends who move to Los Angeles for a chance at music superstardom.  Currently in its second season, “Big Time Rush” had the highest-rated and most-watched live-action series premiere with kids, tweens and total viewers in the history of the network.  In addition, Big Time Rush will be performing at the “Nickelodeon 2011 Kids’ Choice Awards,” where they are nominated for Favorite Music Group and Favorite TV Show.  Their debut album “BTR,” which consists of original songs from the hit series, debuted at #3 on the Billboard Top 200 album chart and has since sold over 400,000 copies.  The group has also sold 1.7 million combined digital tracks to date, including their current single, “Boyfriend,” featuring Snoop Dogg.
*UPDATE! A new shout out from Big Time Rush inviting everyone to come out to the park and see them perform live.

Fans at Universal Orlando will also have the exclusive opportunity to watch a never-before-seen episode of “Big Time Rush.”  In the episode, “Big Time Prom,” everyone at the Palm Woods is preparing for the big night, especially Kendall, James, Carlos and Logan, who are all determined to win the title of prom king.  Episode viewings will be held throughout the day at the Animal Actors on Location! theater.

Guests can enjoy Big Time Rush’s performance, the viewing of the never-before-seen episode of the show and the thrilling rides and attractions of Universal Studios for the price of regular admission to the theme park.  For more information, visit www.UniversalOrlando.com/Events/SpecialEvent/Big_Time_Rush.aspx#.

Update*
Time and places-
The preview of the new Big Time Rush episodes will be at 1p.m. and 2 p.m. in the Animal Actors on Location Theater.
Fans at Universal Orlando will also have the exclusive opportunity to watch a never-before-seen episode of “Big Time Rush.” In the episode, “Big Time Prom” which airs on May 21, everyone at the Palm Woods is preparing for the big night, especially Kendall, James, Carlos and Logan, who are all determined to win the title of prom king.
It would make sense to have Big Time Rush perform if the former Nickelodeon Studios were still in operation at Universal Orlando. The park was home to more than a dozen shows that were filmed at Universal Orlando in the 1990’s. The park is still home to Jimmy Neutrons Nicktoon Blast, but that attraction is closing on April 1st of this year. It remains to be seen if the rest of the Nickelodeon characters are used in the park after the attraction is gone. Still, this is a welcome return of Nickelodeon to the Studios for those of us who grew up with it.