The Force Gets In Your Face Next Year

If you’re a Star Wars fan, this has got to be a glorious time. Clone Wars is a great cartoon on Cartoon Network. It’s trying to be everything that the prequel trilogy was not. It’s capturing the attention of yet another generation and turning them into Star Wars fans. Then, if that wasn’t enough, this year will see the long in the talks revamp of Disney’s Star Tours!Star Tours 2 will take guests on different journeys throughout the Star Wars Universe, including putting us right smack, dab in a Pod Race. We’ll see Darth Vader, possibly Kashyyk, and more. We’ll see our good friends C3PO and R2-D2 back in action, as well as a slew of new droids and characters. The biggest news of course, is that it’s going to be in 3D.

In similar news, it’s been announced that all of the Star Wars films will be released in 3D at a rate of one a year. What wasn’t known was when that will start. From StarWars.com

Lucasfilm Ltd. and Twentieth Century Fox announced today that the 3D theatrical launch of Star Wars: Episode I The Phantom Menace now has an official release date — February 10, 2012! Set against the thrilling and exotic backdrop of a “galaxy far, far away,” Star Wars is perfectly suited to the immersive 3D theatrical experience, and Episode I delivers some of the Saga’s most stunning and spectacular sequences — from the Naboo invasion to the Tatooine Podraces to the climactic lightsaber battle between Darth Maul and the Jedi. Supervised by Industrial Light & Magic, the meticulous conversion is being done with utmost respect for the source material, and with a keen eye for both technological considerations and artistic intentions. 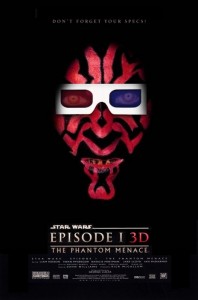 So, with one a year until the end we can look forward to seeing Star Wars in theaters until 2017. At that point, rumor is that we’ll get another trilogy dealing with Luke and Leia’s offspring and the New Republic.

Rant time…I love Star Wars. Always have. My son was kicked out of day care (true story) for taking everything that was stick shaped and playing “Jedi” with it…in short hitting the other kids. My daughter first started dancing when she was a tyke to the Imperial March. I have original toys dating back to 1977, unopened in the box. I have the original soundtrack autographed by most of the living members of the cast and parts of the crew (including the late Sir Alec Guinness). The Star Wars Legacy might as well be the Erik Yates legacy. I’m a fan. But, like so many, I was turned off by the prequels. I’m kind of bleh on the cartoon show, and I’m indifferent about the new version of the ride. I think Star Wars has passed. I’ve been over 3D since after Avatar. Post-conversions suck, they fail to capture true 3D. For most of the films released it’s all about the same old gimmick that it was invented for in the 50’s. LET’S PRETEND TO POKE YOU IN THE FACE!!! Avatar touched on what this generation of 3D was intended for, and the only ride that touches on it briefly is Spiderman at IOA. The intention is to bring a new definition and realism to the art form. It’s to make it feel like you are in it. Sadly, I have not seen a post converted 3D movie that does that. I doubt that this version of Star Wars will do it, and regrettably I feel this iteration of all the films, including the Holy Trilogy, is not only unnecessary but it cheapens the films even more than they have been.

With that said, I will be seeing them all…what can I say.. I love Star Wars.