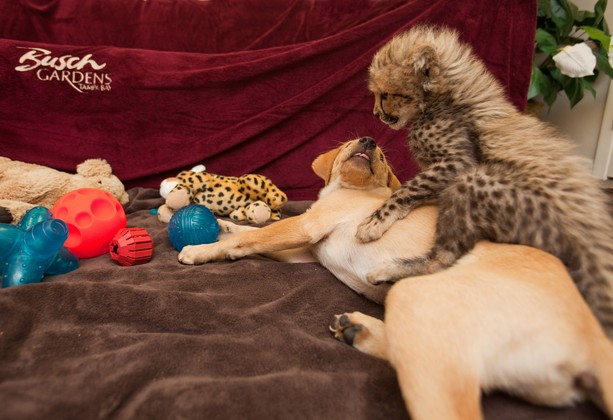 It sounds like an odd combination, but think of that movie The Fox and The Hound. How can a Fox and a Hound possibly be friends? That’s like asking the same question about the puppy and the Cheetah Cub.

Apparently it’s not uncommon for a lone Cheetah Cub to be raised with a canine companion as male Cheetahs are very social and often live in coalitions. The bond between a cub and puppy is very similar to living in coalitions in the wild.

These two will be together for life. During their lifetime, Busch Gardens will even use these two for travel with the park’s education team to help teach the public about Cheetahs. Afterall, there’s only around 12,400 Cheetahs remaining in the wild. Their considerably low numbers considers them to be threatened.

Saturday, April 16th, park guests will be able to stop by and see the Cub and Lab as they will both be moving to Jambo Junction. Fans of the park are also invited to help choose a name for the pair by voting in a poll on their Facebook page. Be sure to vote and help name these cuties!