Cheetah Hunt at Busch Gardens has completed track. They’ve done the envelope testing to make sure everything fits properly, and now the fun part comes. Cheetah Hunt will start testing the launch system. That’s right, these cheetahs will run.

According to a press release issued today, the testing will start tomorrow (Saturday April 16th). The test is strictly for the launching sections of the track and will test each launch individually.

After the coaster is launched, it will go so far, and then be pulled back into the launching point. After a sufficient amount of testing on one launch point, it will then move on to the second launch point and start testing the trains as they launch up the huge “Windcatcher Tower”. By the first part of next week, the trains will move on to the last part of the coaster and into the last launch which is in the canyon portion of the coaster.

After all three launches have been properly tested, the coaster will then begin making complete circuits (which means they’ll launch it from all three points without stopping it). If you’re going to be in the park, you may see the coaster run empty or with water dummies. Water dummies are big plastic jugs of water that are used to simulate the weight of having people on the coaster. 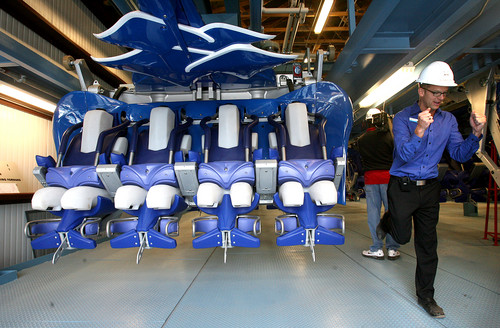 The pic above is from the testing of Manta at Sea World Orlando. You can expect to see trains running with water dummies and without for the next few days. However, don’t expect to see people riding it any time soon the park says that there will be over 3,000 test runs done on the coaster and one of the first people to ride it will be Mark Rose, VP of Design and Engineering. While the park hasn’t said it will happen, there is a chance that the ride will soft open…if it doesn’t the rest of us little people will have to wait until May 27th to ride the new coaster.