In the coaster community, and in the general theme park community, many were very excited about the proposed “Orlando Thrill Park” however in the end it was nearby residents who will most likely keep this project from getting off the ground. 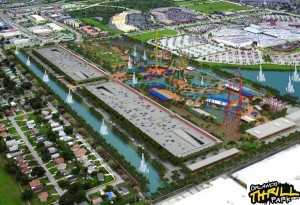 According to the Orlando Sentinel Orlando’s Municipal Planning board voted to reject the zoning and land use changes submitted by Orlando Thrill Park. This would have made it possible to build the park a short distance away from the Tangelo Park residential area, and schools.
Residents voiced opinions of an increase in traffic, noise, and in one case a disruption of education due to the noise levels of the coaster noise and screams. The planning staff of Orlando recommended that the project be approved, but with huge restrictions like coasters only being built in the northern end of the property and away from the residential area, and leave the southern area for things such as gift shops, restaurants and parking.
While it is a blow to the Orlando Thrill Park, they aren’t out just yet. They have five days to regroup and appeal the decision. The 78 acre site planned to have 14 thrill rides, including eight roller coasters from just about every major manufacturer. The park was expected to bring in around 2,067 construction jobs and 1,250 permanent employees. A big impact in a tight job market.
Other big parks have gotten the required “major attraction overlay” in the area such as Legoland Florida, and most notably Universal Orlando which has two parks directly across the street from a high school and has employee apartment complexes built directly behind an arena used for large shows.
What do you think? This was one of the many hurdles in the way for the proposed thrill park. The next step, after the noise, was going to be the height restrictions. Currently in Florida there are no coasters over 200 feet. The Orlando Thrill Park boasted an industry first of an Inverted Accelerator Coaster by Intamin. The coaster would have launched at 120 mph and would have been 425 feet tall. Would this have passed the approval process as it seems there is a height restriction on attractions in Orlando?
View photos of the other proposed rides