Universal Orlando is announcing to “select media” “big attraction news” on May 19th via a special webcast. A lot of people say it will be Gru announcing the addition of Despicable Me. WB, JK Rowling and Universal have a deal in place that they have to reflect the 7th books and movies in the Wizarding World of Harry Potter. The film comes out July 15th…two months from that announcement. I’m not saying…I’m just saying. Theme Park news…anyone? Anyone? Shall we then?

Universal
Speaking of Harry Potter and Universal, the trailer for part two is out.

To watch more, visit tag
Holy crap. All I have to say. It looks to be much different than the books, and I think that hardcore fans will be disappointed, though I think those open to both mediums, books and movies will be stunned. I hope they portray this feel in any future expansions.

Wall Street Journal has a story that says NBCUniversal is moving ahead with talks to purchase Blackstones stakes in the parks. Wise choice, though a deal isn’t written in stone, nor is a decision to try and buy the parks.

Other
Legoland Malaysia will open in 2012 and will make it the biggest Legoland to date. It will feature over 40 attractions and have room for future expansion. It will also feature a Lego themed hotel and shopping district. More.

Even though a board unanimously voted it down last week, Festival Tennessee the $750 million dollar theme park isn’t dead yet. Developer Dennis Peterson can resubmit it, though the Mayor has said that he would have to be better prepared with things like feasibility and traffic studies. More details here.
And Whitewater West has announced the first installation of a waterpark in a zoo: 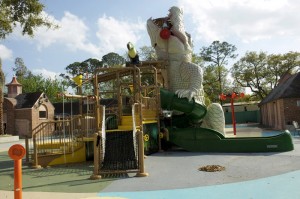 And what’s a New Orleans zoo without a gator? WhiteWater’s designers have created a custom 360-degree themed focal point on its AP550 structure to mimic Spot, the zoo’s rare white alligator. However, this AquaPlayTM gator doubles Spot in size; it’s a whopping 8.5 meters (28 feet) tall and 10.1 meters (33 feet) long! One-of-a-kind, this gigantic gator chomps down on a tipping bucket, drenching kids of all ages with tons of not-so-swampy water. What’s more, its tail doubles as a fun, waterslide engaging kids in the overall experience.

Ride of the Day
The best! And only scenic boat tour on Amity Island goes terribly wrong as a shark rampages and chases you on your boat. Explosions and huge sharks make JAWS at Universal Orlando your ride of the day.