Greetings…you may call me … Keeper…for I am the keeper of theme park tales. Your travels are long, it’s hot and you need a place to escape from the madness for just a second. Sure you can lie out on the grass near the music garden stage but you run the risk of people like me making fun of you. You can sit down in Shrek 4-D and get a quick nostalgic nap but there’s all that dragon fire. OR you can use your universal American Express card to unlock your own personal oasis far away from the crowds. 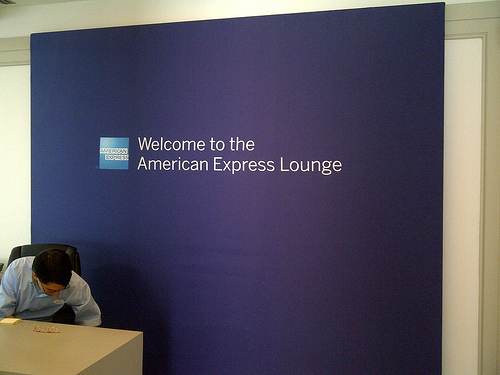 Thru a non-descript, almost hidden doorway located across from ye olde gift shoppe you can be pampered and re charged for your adventures. This charming hidden treat opened on May 10 th and I was able to visit on its second day of operation.
[flickr]http://www.flickr.com/photos/getreadytoride/5711514765[/flickr]

[flickr]http://www.flickr.com/photos/getreadytoride/5711498247[/flickr]
All it takes to enter the mystic portal is a Universal/American express charge card and to have purchased your tickets or Annual Pass with it. When I approached I explained that I did use my card to purchase my AP but it was about 8 months ago. The CM explained that technically the program just started a day ago and the offer does not extend to prior purchases but he welcomed me in regardless. When the door shut behind me I left the park and found diffused lighting, low calming music, comfortable chairs, and wonderful almost over-powering air-conditioning.
[flickr]http://www.flickr.com/photos/getreadytoride/5712059614[/flickr]

Retro looking travel posters adorned the walls, there were magazines, park flyers and kids books scattered around the tables and counters of the room. Along one counter there were outlets for laptops and charger bases for cell phones. In going to the desk you can tell the CM what kind of phone you have and borrow the proper connector so you can plug in to the adaptor. A big screen tv was playing park promotional videos and there were even snacks for my enjoyment.
[flickr]http://www.flickr.com/photos/getreadytoride/5711499719[/flickr]

[flickr]http://www.flickr.com/photos/getreadytoride/5711506605[/flickr]
A cooler of ice cold bottle water, along with bags of chips and granola bars were there for guests to enjoy. There is even a private bathroom, not unlike what you’d find in a high end restaurant or resort. While I reflected and re-charged (along with my phone) alone in this hidden haven, I felt like one of the elite, special few. Whether this experience will change as more find out about it remains to be seen, but right now it’s a worthy addition for sun-worn travelers in the middle of adventures and a nice “reward” for those that are loyal to the Universal brand.

[flickr]http://www.flickr.com/photos/getreadytoride/5711505993[/flickr]
EVERY DAY’S AN ADVENTURE