Star Tours was one of those rides that was an instant classic. It had Star Wars, cutting edge technology, a great queue line and Paul Ruebens (Pee Wee Herman). It admittedly, was a little predictable but it was still amazing. Then the Star Wars Prequels happened. All of a sudden it wasn’t so cutting edge and amazing. Finally after a long time in development Star Tours 2: The Adventure Continues has opened.

The ride soft opened last weekend and the reviews that came in were just mind blowingly positive. Of course, they came from huge Disney fans that either run Disney sites, or sites that are so “PR” they never say a negative thing about anything. Admittedly, I’m no big Disney fan. I love Disney, but I don’t think that EVERYTHING they do is great. If you’ve been a reader of this site, you’ll know that we also aren’t very PR. If we don’t like something, we don’t ignore it. We tell you what we don’t like. We give an honest, sometimes overly critical review. Such is the case with Star Tours 2. But we’ll get to that in a minute. 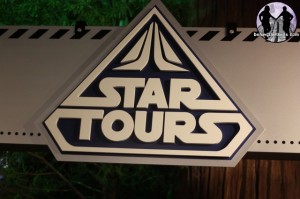 If you’re a theme park fan and on Twitter, you probably follow @Disneyparks. If you don’t, you really need to. @DisneyParks is the official blog of the Walt Disney parks in both Florida and California. They held a contest for those who follow them on Twitter, and limited it to only 250 entries. We were able to enter, and won. Disney Parks knows how to throw a party. We were whisked away from Blizzard Beach and taken backstage to Disney’s Hollywood Studios where we were treated to a late night presentation of Star Tours including a chat with the Imagineers responsible for the re-imagining of the new attraction. 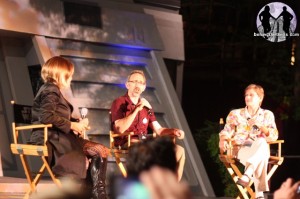 It was a little difficult to concentrate on what the imagineers were saying as a lot of characters were walking around interacting with the guests. Jawas, Wookies, Ewoks, Bounty Hunters, Jedi’s…just about everyone was walking around posing for pictures and even taking a few prisoners. The absolute best thing of the night had to be the fact that costumed characters were taking flights on Star Tours with guests. It really gave the attraction that Spaceport feeling that they were going for. 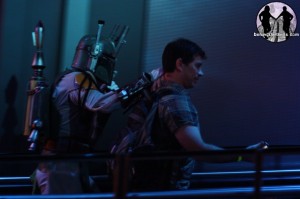 There was a give away for 50 sets of the amazing destination posters signed by the artists themselves…oddly the majority of the 50 were made up of reporters, and web site owners. The majority of those were not at the media event. Coincidence?

Star Tours 2-The Adventure Continues takes guests on journeys throughout the Star Wars universe. It visits locations from all the films including Tattooine, Hoth, Corruscant and more. In fact there are 11 different locations that the ride can take you, which are all chosen randomly. Added in with the different destinations are several different scenes and characters. For example, one ride you may be searched by Darth Vader in the beginning of the film. The next, you may be attacked by Boba Fett, and visited by Yoda. In total there are 54 different combinations that can be made, so there’s a pretty good chance that you’ll never get the same ride twice.

The other major change is in the queue line. Before you walked through a type of factory where droids were being put together and taken apart. Shadow projections were everywhere and you were able to see a lot of your favorite characters from the films. Now the whole area is themed to a sort of Spaceport, complete with Jedi’s walking by windows, luggage sorting and a TSA full body scanner with a Droid that barks rules at you.

Bad news first. The first thing that rubs me the wrong way about this is the title of the ride.

So we are actually in prequel times after the events of Episodes 1-3 and before the events of Episodes 4-6. This is taking place BEFORE the events of the original Star Tours. Hell, the original droid is seen and marked defective! A pre-cursor of things to come! I’m being a tad picky, but shouldn’t this be called Star Tours 2:The Adventure Begins? I guess in doing that you would admit that the future is kind of crappy, and the past is better? I don’t know…I was about the only one who saw it that way.

The queue line is a bit of a step backwards. It’s fun, it has some stuff going on, but there was so much more happening in the old version. Still, it’s good.

The ride system is still the same simulator system it always was. The problem lays with the still queasy feeling you get from the motion. Nowhere near as bad as it was but still there for me.

The queue line was still a Star Wars queue line. Filled with bright vibrant colors, R2D2 and C-3Po. The bickering old droid couple was there, and brighter than they had ever been. The TSA droid was funny, giving a lot of interaction with the line. 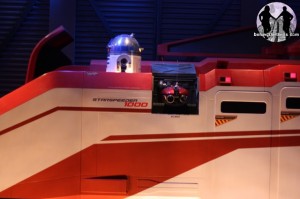 The ride itself was crisp and clean. Easily the best part was the part I was worrying about the most. The digital 3D. Most 3D theme park attractions are the gimmicky type that puts stuff in your face and goes “HEY LOOK I’M IN YOUR FACE!” Surprisingly Star Tours 2 doesn’t do that. It looks like you’re looking out a window. In some scenes that window disappears and it feels like you are really in the action. Spoiler alert….

In one scene a ship crashes through the view screen and it’s so damn real I had to take the glasses off and see if it really had. Also the inclusion of a “spy” or “princess” and the interaction the film has with that person was flat out one of the best things I’ve ever seen in a theme park attraction.

And the glasses aren’t the type that you find on your typical 3D attractions at parks. Instead they are really sleek looking lenses that make the viewing experience all the more detailed. 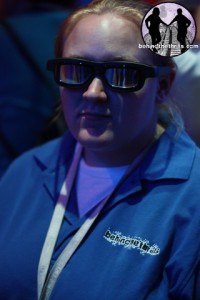 Overall it was a great upgrade to an already decent attraction. I could go with some more stuff in the queue line, and maybe a stationary area to experience just the films. But overall if this is the type of quality that we can expect from George Lucas and ILM next year when the Star Wars films themselves gets the 3D treatment, count me in.

Check out all our Pics from Star Tours 2

For more information on Star Tours 2-The Adventure Continues, including tickets visit the official website.