We first told you about this rumor last week as told by Jim Hill Media, and now the official Disney Parks Blog has confirmed it. Blackbeard comes to Pirates of The Caribbean the ride May 20th. 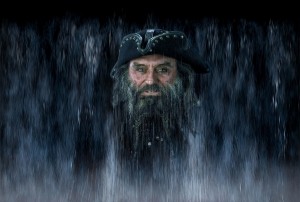 As reported last week, Blackbeard the Pirate as played by Ian McShane will replace old Squid Lips, Davy Jones (Bill Nighy) in the waterfall scene in Disney’s Pirates of the Caribbean in both California and Florida. McShane filmed the scene back in February. It was directed by Imagineering Writer Michael Sprout, who wrote the script for Davy Jones several years ago.

And just what can we expect from the pirate all pirates fear? Check out this clip from the new movie:

But for you fans of Davy Jones, never fear, this is only temporary and fish face will return later this year.