Have you ever had one of those days where things kind of just don’t go? Awake at 3:30 to send Racheal on her way to Busch Gardens Tampa for Cheetah Hunt..an event I didn’t go to. Several hours, and no sleep, later chemical pumps freeze and we literally have to chip chemical out of the motor. Someone calls out of the blue to rub something in my face after not talking to me forever, and now…the trailer for the abomination that is Happy Feet 2 hits the web with badly singing penguins. Goodbye Thursday, get the hell out. Writing your own columns are better than therapy sometimes. How was your day? Sleep well? Have a nice dinner?

Sea World Texas has released an all new, quite impressive, image for their just announced Aquatica waterpark. 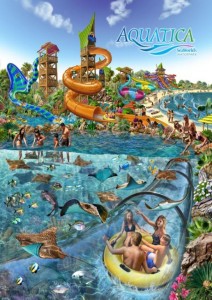 I’m loving the representation of the Sting Ray slide. The one in the back looks scary, and the Sea World Blog describes it as having “moments of weightlessness”. Sorry, when I’m on an innertube with no harness…that’s not a feeling I want. But I’m a wuss like that. Head over to the official Sea World Blog for more information on all the slides and a breakdown of exactly what they’ll be changing.

A short blurb on Bloomberg about Sea World Parks and Entertainment. They plan on hiring around 13,000 employees in the coming months. This comes after Sea World laid off around 250 people in the first part of this year. Though with great reviews and word of mouth on new attractions like Sesame Bay of Play, One Ocean and Cheetah, attendance this year has been up. Perhaps this is for the busy holiday season that will start with Howl O Scream at three of it’s parks?

Orlando Sentinel reports a loophole that allows Disney to avoid taxes by selling tickets to themselves. Sound shady or smart?

The United Arab Emirates said in an article that to become a worldwide travel destination it needs to have a park like Disneyland….but it doesn’t want Disneyland…just a park like it. Let’s face it, Ferrari World is cool. Universal would be amazing. And a Marvel Park, or George Lucas created park would be jaw dropping..but if you want to bring in the flocks of faithful, you need the mouse.

Disney has withdrawn the copyright application for the name “Seal Team 6”. According to the Associated Press, pressure from the Navy seems to be the biggest reason. Good! While I’m all for promoting the American Spirit and giving a nod to our soldiers…turning one of the most elite teams in all of the Armed Forces into a Saturday Morning Cartoon just bothers me.

Disney has announced that it will re-release the Lion King in 3D in theaters beginning in September. As CHUD says “see Sex spelled in front of Simba in 3D!”.

Other
Six Flags Great Adventure will have a huge Comic Book Convention May 29th. Events include guest speakers, comic galleries and more. Talk about not pretty, Theme Park nerds and Comic Book nerds together in one place? More details.

The first step in bringing a Schlitterbahn waterpark to Florida could be cleared this week as Broward County Planning Council is set to decide on whether or not it will sign off on the idea and send it to the state. If approved it would take the place a decaying stadium, create jobs and bring in visitors. Of course the biggest hurdle will be Governor Rick “Voldemort” Scott. Scott has already become the least popular governor in the country by promising jobs, but cutting state employees pensions, and positions. He’s also derailed the high speed rail (tell that to BGT) and killed several unicorns, destroyed rainbows and made kittens cry. More information on Schlitterbahn.

And because I shouldn’t suffer alone…Happy Feet 2

It doesn’t matter how cute it is…it can’t stop the suck!

In honor of Cheetah Hunt opening at Busch Gardens Tampa, every ride of the day will feature a different Busch Gardens attraction.
You are the sun god blazing across the sky, bringing with you blazing colors and the speed of light. Like the sun you rise high into the sky, and set deep behind the horizon. Like a god, you smash Fabio in the face with a goose! This is why Apollo’s Chariot at Busch Gardens Williamsburg is your Ride of the Day.