It’s Cinco De Mayo! And while most of you are out partying we are hard at work…where we haven’t been for the first half of this week. Yes, we know, bad nerds. Those of you who have met me will tell you..I’m fat. It’s something I’m working on, and with kids and all the gym and the site are two things we have a hard time juggling, but we are managing. And I am managing to get some weight off, because as you know we have a new coaster coming soon and Intamin is not fat boy friendly. I don’t want to be that website guy that doesn’t fit the harness. Now on to theme park news.

Charities
This is more haunt season news, and not even that. Our friends Ed and Gavin, better known as the Midnight Syndicate are holding a contest in which you can win autographed Midnight Syndicate stuff. This is all to benefit the Red Cross.Head over to their official Facebook Page, and like them. They are really great, and you should like them anyway. For every new like they get on Facebook they will donate to the Red Cross. They are also now authorized to take donations on their website, and for every donation over $30 dollars they will send you an autographed CD of your choice. If you don’t think you know Midnight Syndicate, and have been to HHN at all in the past five years then you are wrong.

Head to their official site for more info on how you can help.

Quassy Park is rolling out the Wooden Warrior this summer, actually they already have, and it’s a huge success. So with that in mind they will be holding a Laser Light Spectacular called Rock N Roll R Coaster. Bring a canned food item, and watch the show. Easy as that. More information here.

Remember the amazing sounding complex coming to the Mercado area of International Drive in Orlando? It’s supposed to be built by Merlin and feature a huge wheel, a Madame Tussaud’s and possibly London Dungeon. It was to be called I-Walk. Universal is suing Merlin over the use of the name saying that it is trying to capitalize on their name CityWalk. Meh, I say their trying to capitalize on Iphones, but what do I know? More on the matter here. Personally it sounds like this may be a kink that Universal doesn’t need and they’re kind of grasping at straws to try and stop it.

No decision has been made on Comcast’s side on whether or not to buy the Universal theme parks. Those interviewed said they will make a decision on what to do within the next month. Keep in mind that if the park isn’t bought by Comcast it can go to third parties, and Universal Orlando could lose Harry Potter. The attraction made record profits and attendance for the parks last year. Kind of stupid to drag your feet.

Cedar Fair
Dorney Park has just opened their version of Planet Snoopy, which is a huge success at all the other Cedar Fair chain parks. This version will have 16 rides, and converts the old Camp Snoopy area. More info.

Kings Dominion has teamed up with Nasa for and education day Friday May 6th. Employees from the Langley Research Facility will travel to the park and will hold scavenger hunts, answer questions and more.

Disney
Mouse Planet has an article talking about the least favorite attractions at Disney. While they name good candidates like It’s Tough to Be A Bug and Tiki Room Under New Management, I find a bunch of them to be extremely gag worthy. Nemo the ride, Honey I shrunk the Audience, Stitch, and Monsters Inc. Laugh Floor come to mind and I avoid them like the plague. What are your least favorite Disney attractions? Let us know in the comments below.

If you live on the West Coast, you can enter to win a contest sponsored by Chevron and Disneyland. “Win thousands of prizes” though no prizes are really listed. This is all in celebration of their version of Star Tours 2. Full details, which do not include prizes.

Other
Mortal Kombat Legacy is still going strong, this week with the first part of a two part episode. This one teases about Kitana and Mileena.

And Finally Maid of The Mist may not run after this season at Niagra Falls due to bidding and contract negotiations. The iconic boat has taken people below the falls for decades and last year alone saw 2.2 million people. More info.

Built in 1927, it was a New York landmark for years. It was closed in 1968, condemned in 1972, reopened in 1975 and used as a backdrop in the Michael Jackson film, The Wiz. It has seen many hard times, including the closing of it’s home park Astroland in 2008, and still it survives and runs to this day. That is why Cyclone at Coney Island is your ride of the Day. 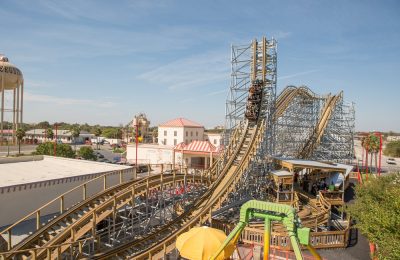