In honor of National Roller Coaster Week, last week we asked you what you thought was the “BEST COASTER IN AMERICA”! You nominated and voted. In the end it was a classic wooden coaster that took top honors and was titled the best. In fact we had a lot of great nominations and votes. In honor of all the great coasters, here’s your top five.

Before we reveal the results, I must mention that this poll was voted on strictly by our readers. A few parks put the word out, and the fans of those parks really pushed it through. Our list started out with a few of the top mentioned roller coasters via Google. They were at the top listed parks via Google. We started the poll Tuesday, and left the nominations list open until Friday afternoon. If you did not see your coaster listed, you did not nominate it. If your coaster did not win, you didn’t vote for it…and if you voted for it, you didn’t get your park to spread the word. Also, many will argue that you “just can’t compare wooden and steel coasters. They’re not the same beast”! Absolutely right. They aren’t the same, however, a good coaster is a good coaster. And a great coaster should be able to transcend the type of coaster and stand alone at the top of any list.

Now on to the top five coasters

4.Sheikra-Busch Gardens Tampa
Another B&M coaster in Florida’s Coaster Capital. This coaster has the designation as the first dive coaster in America. At 200 feet, it doesn’t have many inversions…but watch that first drop..it’s a doozy.

3.Apollo’s Chariot-Busch Gardens Williamsburg
A B&M hyper coaster, yet again at a Busch Gardens park. This coaster takes you along the path of Apollo the Sun God. You descend high into the sky and then plummet down into the Rhine River.

2.Cheetah Hunt-Busch Gardens Tampa
The first coaster in the top five not made by B&M. This Intamin multi-launch coaster molds a coaster and world class animal habitat into a seamless mix. The coaster has become wildly popular for the park, and is considered to be “family friendly” where the majority of the park’s other coasters are not. 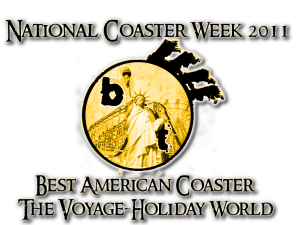 A classic wooden coaster designed by the Gravity Group. This coaster is a favorite in one of the most renowned family run parks in the country. Over a mile long, with a top speed just shy of 67 MPH it’s fast. And it is your best Coaster in America for 2011.