The Wizarding World of Harry Potter was a huge addition to Universal’s Islands of Adventure. Over the past year, attendance has soared through the roof, and it doesn’t look like it’s about to slow down anytime soon. The area offers things that you’re not going to find anywhere else. You won’t find it down the road, or in another state.. In fact, you currently can’t find Butterbeer anywhere else in the world except on your TV screen while you watch the Harry Potter movies.

A year ago today, Erik and I visited the Wizarding World of Harry Potter for the very first time with our kids. It was a tough decision for us whether or not to make the trek up to Orlando, but we did (and I’m glad that we did). We all played hookie from school and work, and off we went to Universal. 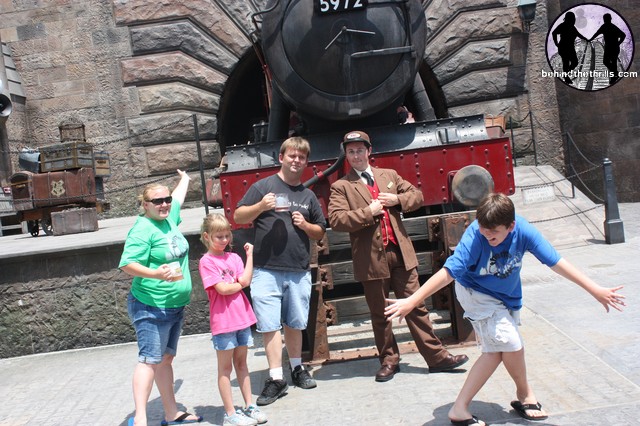 I won’t get into my exact thoughts or anything of that matter, as we’ve already done that last year (you can go back and see those photos and such here), but I will tell you that the Wizarding World was a lot of fun and blew my mind left and right. Every corner I turn as I still visit the area a year later, I still find something new. Butterbeer is nothing like drinking a Pepsi. That’s routine, but when I’m guzzling down a Frozen Butterbeer, I love each and every gulp – every time. It’s something that won’t get old with me.

The Wizarding World has brought a lot of success to Universal and it’s put them on the map for many people who may have never ventured outside their “comfort zone” and made them want to try something new. Congratulations to Universal for their success in such a great attraction and let’s hope for many more years of high attendance. No, I’m not saying that I’m a fan of the lines, but I am saying that park attendance being up has brought a lot of good into the park.

When I first began visiting Universal, I’d heard of things like Trike Encounter, Skipper Tours, and the water vortex inside of Poseidon’s Fury, but I’d never actually seen them. Since the Wizarding World opened, Trike Encounter has become somewhat of a seasonal attraction and the water vortex has returned to Poseidon’s Fury.. for now. Occasionally I’ll see a new effect on a ride I’ve never seen before, and I’ve got to say that I wish I had seen Islands of Adventure the year it opened.

What am I really trying to say here? I love the Wizarding World of Harry Potter and Frozen Butterbeer, but even more, I love that Universal is putting a little bit of love back into the park and allowing me to see things that I’ve never  seen before and keeping my theme park experience oh-so fresh.