With the cutting of the ribbon, the third of three new coasters coming to Six Flags Magic Mountain has opened. Now, Magic Mountain is the Coaster Capital of the World. It takes the title from Cedar Point in Sandusky, Ohio. The new Zac Spin coaster takes center stage in the all new DC Universe. 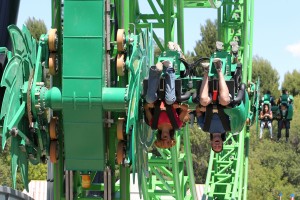 The coaster is only 107 feet tall, but stands as one of the most intense in the park. Riders are loaded four across, in two rows, back to back. They are then taken up a vertical lift and spiral, spin and flip down 825 feet of twisted track 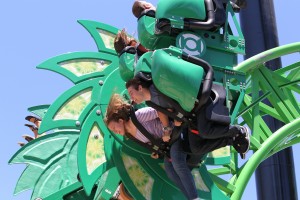 Taking a ….queue from coasters like The Dark Knight, Green Lantern:First Flight has two elaborate pre-shows where guests follow in Hal Jordan’s footsteps and go from being a test pilot to wearing the ring and taking the oath of the Green Lantern Corp.

The Green Lantern is but one attraction in the new DC Universe. The area has converted a lot of other attractions to the DC Comics theme. Wonder Woman’s Lasso of Truth, and The Flash Speed Force join Batman: The Ride and Teen Titan Tower Pizza.