Summer has officially kicked into high gear and that means the parks are extremely crowded and one of the biggest haunt events in Florida is right around the corner. That’s right – Halloween Horror Nights XXI.

Construction has officially kicked off in a few different areas for Horror Nights. 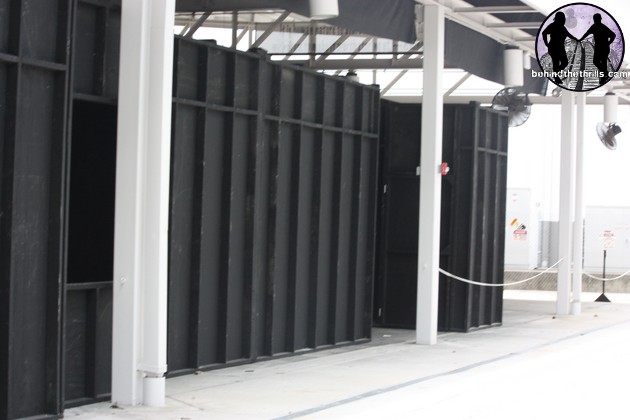 The extended queue for Disaster is by far the most noticeable and most obvious. It’s really not hard to see those new walls going up behind portable construction walls. There’s not really much going on now, so stay tuned to see what’s going on.

Next up is Jaws. Funny enough, there was more than just Horror Nights stuff happening in the area. Jaws was also closed over the entire weekend. I’ve heard that over the weekend the lagoon was completely drained for a short refurb. I’m not quite sure how true that is, but when I was at the park, the ride was closed and the lagoon was still full of water. 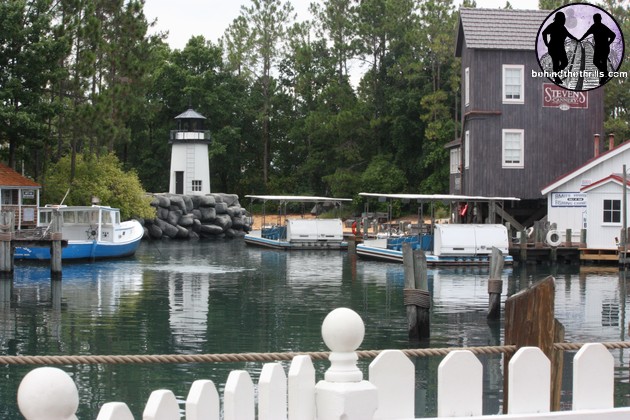 The extended queue for Jaws is also beginning to turn into stuff for Horror Nights. 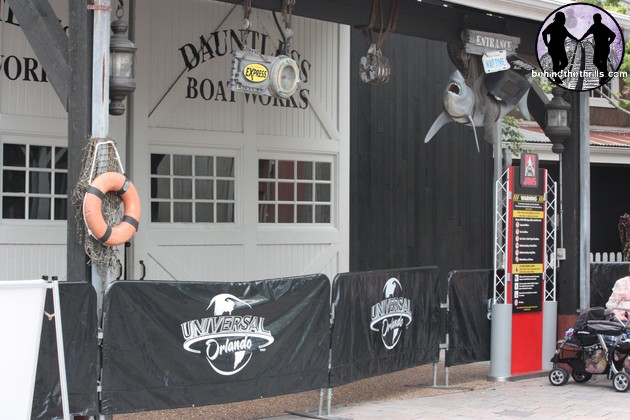 Because the ride was closed, we couldn’t exactly get a good look at anything, but there was a lot of stapling and other stuff going on behind the walls.

Around The Simpsons ride and Curious George there’s a bit going on. Well, not much. Near Curious George I couldn’t really see anything worth taking a photo of, but I did manage to spot an A Frame Ladder on the inside of a fenced off area. 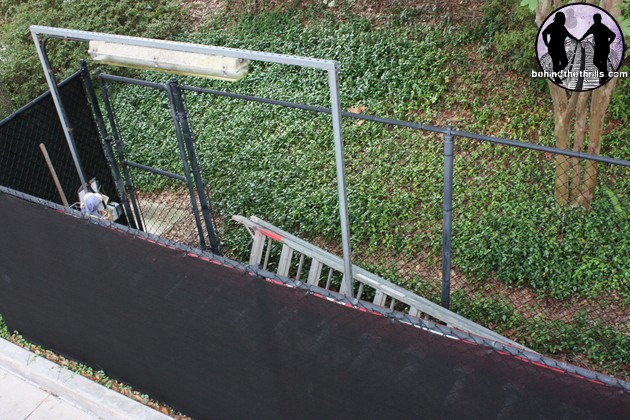 It also seems like there’s a LOT of random construction walls through out the park. One of them is the area right outside of the Universal Studios Store. I’m pretty sure these construction walls are around a planter, so they’ll probably be gone pretty soon.

Last up at Universal Studios is Jimmy Neutron. It’s rumored that Neutron will stay open now through August 18th when it will permanently close to make way for the Despicable Me ride. Stationary seating used to be a great way to just see the movie and reminisce, however it seems that you can’t just “blast” to the front of the line anymore like the sign says. During my visit I was told to wait in line, though I’ve never had to before for stationary seating. 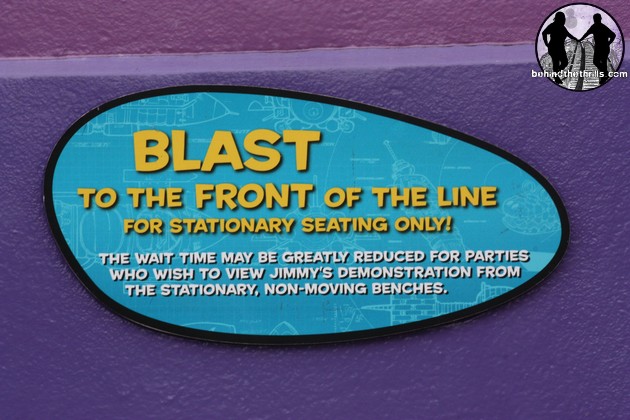 Maybe because the ride is closed, there is a sudden higher demand for stationary seating?

Here’s another one of those “random” construction walls I mentioned earlier. I can’t quite remember what’s in this area, but I’m guessing they’re doing some work to part of the bridge that crosses over Hulk. 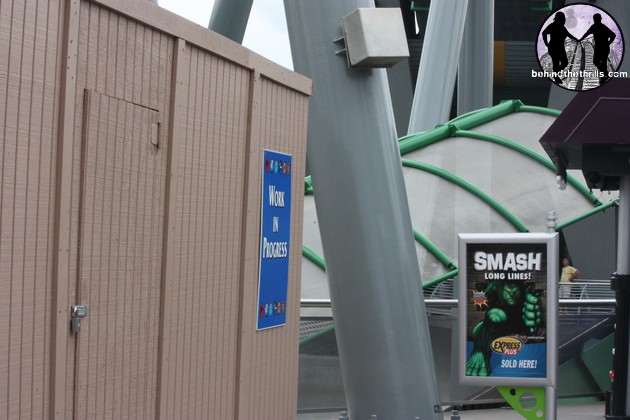 It doesn’t appear these walls have anything to do with the coaster itself though.

The park is also doing some work in the Mythos area. I’m not quite sure why the backside of the building is blocked off, but I can tell you that there’s construction walls on both sides. 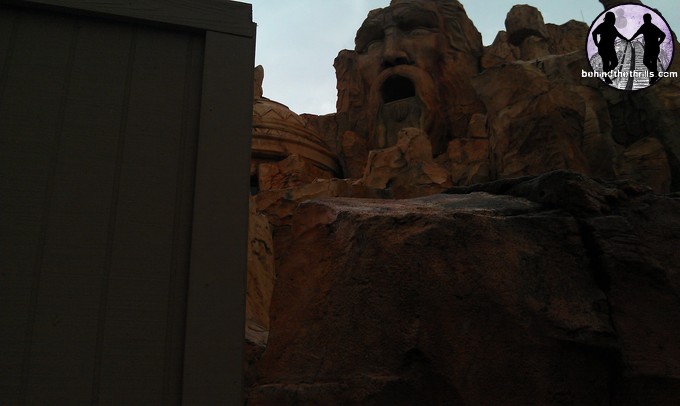 On top of that,  no water was running either. I’m guessing they’re doing work on the water area and need it to be dry to complete the work or they’ve simply turned the water off because of the drought.

A new pathway has gone in near Trike Encounter. I’m gonna take another stab here, but I’m guessing this pathway may be a permanent path into Trike or they’re attempting to widen the path up to a bit to alleviate foot traffic in the area. 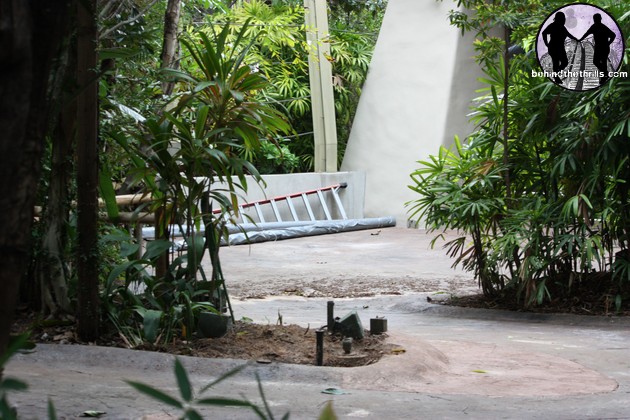 And last up is Hollywood Drive-In Golf. Although it’s not scheduled to open until sometime in 2012, land clearing has already begun for the area. From the moving walkways heading into Citywalk, you can see construction walls down in the drop off area and now both sides of the over pass have been cleared. 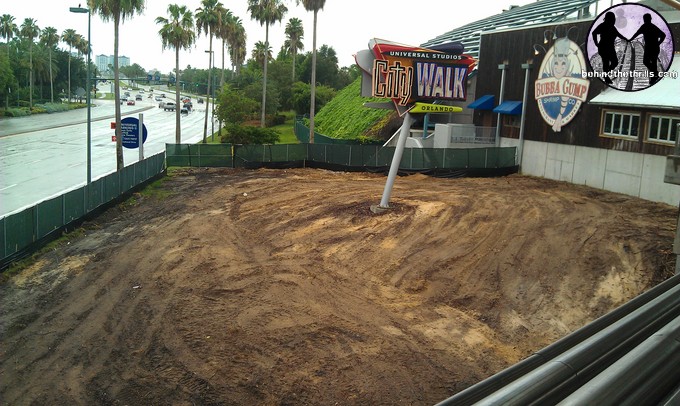 And finally, here’s a collection of some random photos.