This week’s Offsite Adventure:Super 8
Super 8 is a movie directed by LOST creator JJ Abrams who also directed the much loved and successful Star Trek reboot. Super 8 tells the story of a group of kids who are filming a horror movie in their home town with a super 8 camera for a contest. During a late night taping at a train station the kids witness a train being derailed and are unknowingly thrown into a government conspiracy to hide something they’ve had in their possession for many years.

Relates to theme parks….how?
It does, trust me. I’ll get to that in a minute

Who will like it?
Theme park geeks will love it. Movie geeks will love it. Anyone who grew up on the films of John Carpenter and Steven Speilberg will recognize many of the same themes, cinematography style and even some lines in the film. It’s very much an homage to all the great films of the summer from JAWS, Close Encounters, ET, John Carpenters The Thing, Halloween, The Goonies, Monster Squad and more that I’ve thought of. However, it’s not a film for everyone. While I watched it with big bug eyes, and a huge smile on my face, I heard a few declare “THIS SUCKS!”. To them I say, blow it out your ass. But we’re all different.

Was it any good?

I loved it. I’ve read dozens of critics who have deconstructed it, and looked for the emotional meaning of everything, and even made plot suggestions, but those type are deprived lunatics who are seeking a perfect film that just doesn’t exist.
SPOILERS BELOW

For me this film was my childhood. Hell, I’m not sure, but I think parts of it were filmed in Fairborn Ohio, a suburb of Dayton, where my dad lived and I spent my summers. I recognized several of the streets, and landmarks in the film. But more than that, the main kid Joe has suffered a loss. His mom died and he and his father are looking for ways to move on and get closer to each other. He surrounds himself with kids that share the same interests and all of whom are little geeks inside. He spends his time making models, and hangs out with a kid who loves monster movies both watching and making. Hell everyone had a friend that obsessed over something that wasn’t the normal way parents wanted them to behave. I was obsessed with comic books, movies and of course theme parks. My friends were too. I had the favorite past time of collecting bugs and fossils instead of watching the Reds game that everyone else would gather around and watch. We would all sit around in my dad’s basement talking about girls tits, the latest issue of Spiderman, and the big movies of the summer. We also sat around wishing we could find some kind of adventure like the kids in ET, The Goonies and Monster Squad. That’s the world we wanted! And just like the movie, there was one among us who was obsessed with blowing things up. This movie was more nostalgic to me than the most nostalgic of Disney rides. And here it is, perfectly on film, my childhood playing back to me, not the way it was…but the way I WANTED it to be.

As for the story itself, it brought people in with the prospect of seeing a great monster or alien movie…and it does that, but it does that only in glimpses. It’s a story of friendship, family and growing up first and foremost. It’s also a story of getting over the shit that life sometimes hands us. From the trailers and movies, we know a monster is getting out and wreaking havoc. But by the time that happens, we are so wrapped up in the kids that the monster seems secondary…and even still the monster or alien comes out and you swing your attention to him.
Then, there’s the bad guys. There are bad guys, and they pose a threat. They have lost something, they want it back and they don’t care how they get it. The bad guys aren’t the faceless key jinglers from E.T. and they aren’t the over the top looney toons that the Fertelli’s from The Goonies are. These guys are the Air Force. They are real, they have a face and they are scary. The kids are told early on “If they find you, they will kill you and your family”
HOLY SHIT! It’s the stories we’ve heard from years but none of us believe!
“The government wouldn’t do that…For the people, by the people!” The government in this movie doesn’t give a shit about your rights. The government is going to get back what they lost no matter what. Kind of like now, and the way the government went after terrorists…they invaded your privacy, climbing in your windows snatching your people up, trying to take them…so you better hide your kids, hide your wife and hide your husbands cuz they snatching everyone out here.
And back to the monster, it takes the JAWS approach of “less is more”. We see glimpses all the way up to the last few minutes of the movie. It’s very much an Abrams monster with many arms, but it’s not a Cloverfield beast. It’s an alien, and it has a tender moment where you see the pain that this poor creature has been put through. But, it’s still a monster. The design is very much inspired by the stop motion beasts of Ray Harryhausen, and of course John Carpenter’s The Thing. Scary, and at the same time fascinating.

The story does have flaws. I don’t want to point them out, because I love the film that much. But it’s not perfect.
But, the story is very much one that you can love. It’s got such a real feeling and heart. The kids cut up and have fun, they rag on each other…they fight and get jealous…and yeah..the kids cuss. One funny moment is a slow motion frame where things are getting real and a kid can clearly be seen mouthing “HOLY SHIT!”. It’s a fun moment that takes you back.
In fact, I keep finding myself saying that. This movie takes you back. It truly does. So let’s forget all of the obvious references like, E.T. JAWS and more. This movie is the film that when I was a kid, I would drag my parents out to see. Back to the Future, Star Wars, Ghostbusters…all of those had the same feeling. You HAD TO SEE IT. And your mom or dad HAD TO TAKE YOU. And because they took you to see it, it gave you that one special bond. For my mom it was Fox and The Hound. That movie spoke to us, and we shared that moment. For my dad it was E.T. We shared the pain, and to this day neither one of us can watch it without thinking of the other. This was a film that I very much wanted to see with both of my kids…but mostly my daughter. She would have loved it…just as she loves all the great 80’s movies.
Now, how does this relate to theme parks? Why should this speak to all of us theme park fans? And let’s clarify…just because you love Cedar Point and roller coasters, that doesn’t make you a theme park fan. You’re an adrenaline junkie.
Theme park fans are the ones that are completely immersed in the story, and environment. We’re the ones that will spend hours in the queue and months at home trying to duplicate something like Butterbeer, or even worse…the smell that you experience in the E.T. queue line. We get the little details. Just like the director kid-Charles understood “production value”. Every little detail. And it’s the feelings of the movies like JAWS, ET, The Twilight Zone that transition and make great rides. You don’t get that with a coaster. You don’t get a special tingly feeling making a loop, like you do when you hear “Welcome foolish mortals”. It’s something that get’s engraved in your head, etched in your mind. It’s not a feeling that subsides. It’s the continuation of a story…or even the telling of a story that is unique that we would love to see made into a movie.
In this day of movies that are made just to capitalize on a recognizable name, a film like Super 8 comes along and refreshes us with a fairly unique idea. And where it’s great to see familiar movies and names made into theme park rides…it’s even better when creative minds have a renaissance and just take ideas and make something great out of them without a huge character to push it. That’s the ideas that this movie captured for me…and I hope it’s successful and spreads like wildfire.

The kid, Kerry, is a pyromaniac…you can see him growing up and setting buildings on fire. He is my absolute favorite character in the movie, probably because he’s the most passionate about the thing he loves. He utters to the kids “Hey, I’ve got my fireworks…I say we find this thing and blow the shit out of it!” and you believe that he thinks he really can do that! In fact, the kids are all the best parts of this movie. They each deserve a nod…especially the girl and the director kid Charles. And in fact, it reminds me of how a group of geeks got together through a passion and did something great….you may not know them..but what they did changed how the face of Theme Park Podcasts. 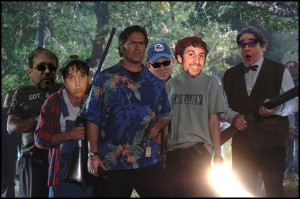 But stay after the credits start rolling for the completed Super 8 film that the kids were making. It’s really that great fun film we all tried making with our parents video cameras.