Halloween Horror Nights is a night time haunted event at Universal Studios Florida that spans 25 nights this year and features 8 haunted houses, 6 scare zones, 2 shows and select rides. Parents, this is a warning, this event is not kid friendly. You really don’t want to take your kids, as the event is recommended for those ages 13 and up. However, if you’re like my family you have a smaller one who itches to go and be part of the family fun. In that case what do you do? Do you push it off another year, or do you just bite the bullet and hope for the best? Here’s a few tips on how to handle that situation. 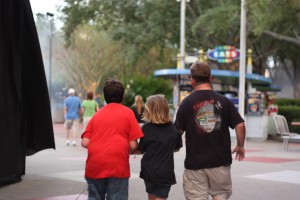 Our 10 year old Madness decided that she was ready to take the plunge at Halloween Horror Nights. She had tried once before with her mother when she was 7. It ended literally in 30 seconds as the actors brought her to tears. For the past three years that night has been lodged in her head as a reminder that, no, she isn’t ready for the scary stuff. But as her older brother (almost 14) Racheal and I are all haunt junkies, and talk about the haunts, it’s worn on her.

A little background on Madness. She’s 10, loves zombie movies and has ridden about five major coasters. She still has a little bit of the “afraid of the dark” anxiety, and hates loud noises. She’s prone to getting “freaked out” by things that go bump in the night, but calms down with a soothing voice. For weeks she’s heard us planning our Halloween Horror Night trips, and she’s also seen the pictures and have seen the videos. She was very much intrigued and decided that after three long years, she was ready to try her hand again at Halloween Horror Nights. We did try to dissuade her and tried repeatedly to tell her that it wasn’t a good idea, but sometimes the best way to let someone learn what it’s all about is to let them experience it for themselves.

So what should you do?

Every kid is different. Some kids will sit there and swear up and down that they’re ready, and others will fight you tooth and nail about going. The kid that says they’re ready could quite possibly end up in tears as the kid that fights going has the time of their lives. So how do you tell if your little one is ready for a big event like Halloween Horror Nights?

The Madness Adventure
So how did the Madness Adventure end up? It was daylight, so she decided that she wanted to do a haunted house. It was completely her idea, though we gave her the choice. We told her that one would wait with her while the rest went into the house, but she wanted to do things together. So, we did. As a family we piled into “Winter’s Night-The Haunting of Hawthorne Cemetery”. It was a mixed experience. They went after our son a lot more than her, at first. Then they piled it on. By the end of the house she was freaked out. No tears, but she clung on to me for dear life. She skipped the next house, but felt the need to try “H.R. Bloodengutz”. Again, kind of freaked out, but since this was more funny than anything, she felt a little relaxed. She decided on two more houses before the lines were too long, at which point she declared no more. She wanted to do the scare zones since they were a little less confined. At first the menacing giants of “Canyon of Dark Souls” were going to get the better of her, until she held up a hand and declared to a group of five descending upon us “YOU HAVE NO POWER HERE!” It also helped that her brother was running scared like a baby. By the end of the night, she was getting high fives from the actors as she went through the scare zone so many times.
We took many breaks through the night to watch Bill and Ted and Deathdrums, and to ride a few rides.
As we rounded the gates she was wore out and ready to go. But the big question was…will she go again?
“Maybe next year dad.” 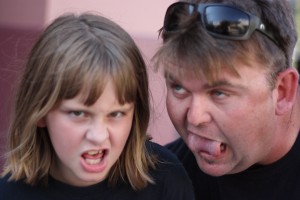