Halloween is a storied day full of tradition, superstition and fun for both children and adults. It has roots in ancient Celtic rituals, and has sprouted into one of the most profitable holidays right behind Christmas. However, one lawmaker would like to change it so that the holiday falls on the same night every year. 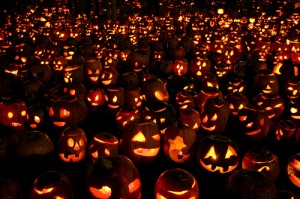 Rep. Tim Larson from Connecticut wants to move the event from October 31st to the last Saturday of the month. Halloween this year falls on a Monday, a day that will have parents running from work to home and trying to squeeze in a night full of Trick or Treating and parties before bedtime on a school night. It’s Larson’s belief that moving it to the last Saturday will not only give parents more time to enjoy the holiday with their children, but it would also be safer, allowing children to start their activities earlier on Saturday than they would normally be able to during the week.

Halloween was originally celebrated as Samhain, the day that the borders between the living and dead were the weakest. On this day, the dead could cross over to the land of the living and wreak havoc. To confuse and deter the spirits, people would wear masks and light huge bonfires. Superstition has kept this tradition going for hundreds of years.

Larson also uses the economy as a reason to give Halloween a permanent Saturday date, stating that it could possibly help stimulate the economy and create more jobs.  But is that excuse even legitimate? Could moving Halloween be beneficial to the economy? And what about one of the key players who’s biggest time is Halloween? How would the move affect the Haunt Industry? Would the move help or hurt haunted attractions like Halloween Horror Nights, Howl O Scream, and countless independent haunts around the country?

Many of the people we spoke with said that they would still continue with their haunts, even if Halloween fell before the end of October.

“Over the years of Howl-O-Scream, our calendar has changed from year to year, depending on how the weekends fall.” Says Jill Revelle Manager of Media Relations for Busch Gardens Tampa “We have occasionally extended to Oct. 31 in the past, but our “standard” has become Thursday through Saturday until the end of October, regardless of the dates. Of course it’s purely speculation at this point, but I would anticipate sticking with what been successful.”

Others aren’t so optimistic about the idea.

” I am not a fan of the idea” says Scott Simmons creative director for Pittsburgh area Scarehouse ” Halloween night we compete with parties and trick or treating. Also, after Halloween, interest in scary entertainment drops. We would continue normal operation, but our business would definitely drop after Halloween. Using his logic, should we also move July 4th and Christmas?”

Many fellow politicians have pointed out that this is part of the problem the country is having, with lawmakers spending time on something like Halloween instead of focusing on the issues. With that the bill will most likely never see the light of day. But how would you feel about it? Do you think that having Halloween on the last Saturday of October would be a good idea or bad? For those of you leaning towards moving Halloween…a warning first.