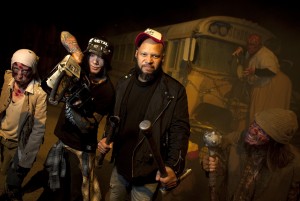 Guitarist DJ Ashba, and Drummer Frank Ferrer tear up the streets of Acid Assault at Halloween Horror Nights 21 before kicking off the U.S. Leg of the Guns N Roses tour. The tour kicks off Friday night in Orlando and is the band’s first tour in five years.

The band has seen several different band members, and neither Ashba or Ferrer are original members. They both have been with the band for several years, and are hoping to be part of the next Guns N Roses album. Guns N Roses were at one time the biggest rock/metal band in the world with 6 albums selling over 100 million copies worldwide.

Halloween Horror Nights 21 continues all throughout the weekend and will be open Halloween night, October 31st.

For more information on Halloween Horror Nights 21, including tickets visit the official website.