Today the world lost Steve Jobs. It’s more of a true statement than when any other person in recent memory has passed simply because he changed the way we looked, listened and connected to the world. Without the influence of Steve Jobs there certainly would be no Apple Computers, and pretty safe to say there would be no internet. At least not the way we see it today. 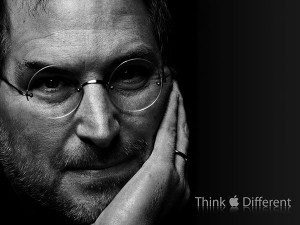 Steve Jobs first rose to stature as the co-founder of Apple Computers. Apple brought the “personal computer” home and changed the way that people saw the industry. Later he would be forced from the company that he helped to create. In a twist of fate, Steve Jobs started another computer company and bought “The Graphics Group” from Lucasfilm which was their computer graphics division. The early days of the company were spent trying to sell high end graphic designing computers to companies, but was later abandoned. The company’s name was changed to Pixar and a partnership was formed with Disney to produce full length computer animated movies for the company. The first film from that partnership was Toy Story.

Since then Steve Jobs rejoined with Apple, and took the “i” brand from being a catchy cliched phrase to a household staple. Apple changed the game of music by introducing the iPod and iTunes, which came right as the music industry was struggling with falling CD sales. Then the cell phone market was forever changed when Jobs introduced the iPhone, a mini computer that doubled as a phone. In 2010 Jobs changed things once more with the iPad, a tablet computer that had no buttons and no external drives, yet it could do almost as much as a laptop computer could.

To say that Steve Jobs changed the way that people looked at the world is an understatement. He became a board member of the Walt Disney Company and helped to usher in a new age in theme park attractions and family entertainment. He was a visionary, and will be missed by all of us who still chase our dreams.

Here’s hoping that Disney, the company that Steve Jobs revamped with the Pixar brand does a tribute somewhere in one of their parks. Perhaps a mural with all of the Pixar characters, or simply a small statue with him, Woody and Buzz. To Infinity and Beyond.
He lost his battle with cancer on October 5th, 2011. He was 56.

How has the world been affected? Read what people have said about the passing of Steve Jobs via Twitter: