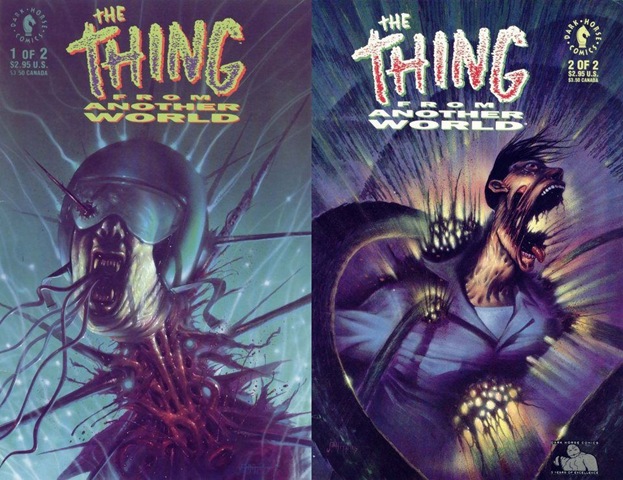 Okay, so each one of these “Things” can be classified as their own, but truth be told there’s just not a whole lot of information on them. Besides, they all really need to be talked about, and time is really of the essence here. From the first story “Who goes There?” The Thing has inspired terror in a variety of different ways. The biggest way, naturally were the movies. Just like the creature in the story, it infected several mediums including radio, comics and the relatively new platform of video games. They all have their own slant on the story and they all either retell the story, or expand on the stories that are out there. These are just a few of the many out there, but some of the most notable.

In the early 90’s Dark Horse Comics produced a series of books based off of the films. There were four total stories, each of different lengths. They explored the world of the Thing in all new ways, with all new graphic depictions. Each series introduced new characters, and old, with the basic premise being the same. The Thing has escaped Antarctica. In some instances the hero is MacReady in others it’s not. The first in the series was a direct sequel to the 1982 John Carpenter film called “The Thing From Another World”. It bears the same of the 1951 film. This is due to Dark Horse trying not to impede on the copyright of the Marvel Comics book “The Thing”. In the story, it picks up with MacReady and Childs getting tired of sitting around the ice and walking towards the coast of Antartica. Childs drags MacReady to the coast as he collapses and tells a Japanese Whaling ship that he’s going back to Outpost 31 to get the rest of the survivors. When MacReady wakes up and the Japanese tell him this, he knows there are no survivors and that Childs must be The Thing. The story strays a bit from the world that John Carpenter created, but is considered to be the best of the stories. In fact, John Carpenter has said that if there is to be a sequel to the film, it’ll follow that story line.
The Thing From Another World was a two part series. It was followed by the four part series-Climate of Fear, the four part series-Eternal Vows and the four part mini series-Questionable Research. Questionable Research included short stories from the world of Aliens and Predator.
Recently Dark Horse announced they will be releasing a free digital comic called-“The Northman Nightmare” a direct prequel to the Thing Prequel that will be hitting theaters October 14th. Click here to check that out.
The Thing Video Game
In 2002, the video game world was taken by storm with the video game sequel to The Thing. It was available for every major playing platform, and picked up where the film left off. A team of Marines research the destroyed facility, find a frozen dead Childs and end up finding more than they bargained for. The game had moderately good reviews, but failed to keep the continuity of the original film and had complaints of being too predictable. In the very end of the game, we see a helicopter come from nowhere to rescue our hero. As the film plays out, we find out our pilot is none other than RJ MacReady…I guess Childs was human after all.
httpvh://www.youtube.com/watch?v=ziOISjHN3nk

BBC Radio’s Chiller
Probably the most loyal and fun lot of the bunch is the BBC Radio broadcast of their “Chiller” series in which actors do a audio play of “Who Goes There?”. It’s not an audio book by any means, but a radio play. It captures not only the spirit of the story, but the feel of the 1982 movie perfectly. It’s a definite listen for any fans of the Thing. Listen below!

Listen to the BBC’s Chiller Presentation of Who Goes There

For more information about this year’s Halloween Horror Nights in Orlando featuring The Thing-Visit the official site.

For more information about this year’s Halloween Horror Nights in Hollywood featuring The Thing:Assimilation-Visit the Official site.