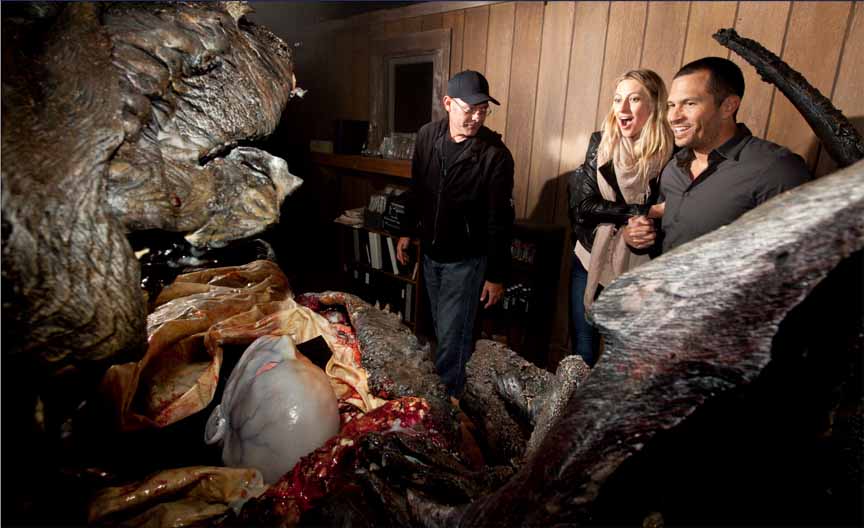 While The Thing:Assimilation has already been a house at Universal Studios Orlando’s Halloween Horror Nights 17:Carnival of Carnage, it has not been featured at sister park Universal Studios Hollywood. Until now. With the impending Thing Prequel opening October 14th in theaters, Universal Hollywood and Orlando have decided to have houses based on the upcoming Thing Prequel. The houses take place at the Norwegian research facility from the John Carpenter film. As you journey through the house you see a mix of animatronics, puppets and live actors. Most importantly you see a lot of story elements from the upcoming film. As creative director John Murdy from Universal Hollywood said it’s a huge movie preview.

The Orlando version house is located in a soundstage, leaving plenty of room for a huge facade of the Thule Station, complete with falling snow. As you walk through the house you are met with a crazy Norwegian blasting a shotgun over your head at a fellow researcher who’s been infected. That sets the tone for the entire house. Any of the menace you see is at the hand of an actor with some kind of Thing attached to him or her. It’s really a brilliant move on Universal creative’s part. You have a group of defending actors with guns who seem to be trying to protect you, and they are protecting you from humans in various stages of transformation.
SPOILERS AHEAD!

There’s even one scene in which we see an empty block of ice and a huge ass animatronic popping down from the ceiling. It’s a surprise that when you see it, blows your mind. There are also various other forms of creatures and of course we have a walk on the spaceship in which the Thing itself came to Earth on.

The Hollywood version takes the same story and puts it’s own twist on it. Here we see what looks to be much larger effects pieces that actually interact with the crowd. Instead of a huge amount of animatronics or puppets, we get actors in some of the most grotesque prosthetics ever assembled. It’s another truly amazing house.

Creative members from both parks worked with the film makers to get the look and feel of the movie just right. The houses give away some of the plot points for the film, but just enough to make you more curious. In a lot of ways it’s a great way to build buzz for a film that really needs it.

For more information about The Thing:Assimilation at Universal Studios Hollywood visit the official website.

For more information about The Thing at Universal Studios Orlando, visit their official site.