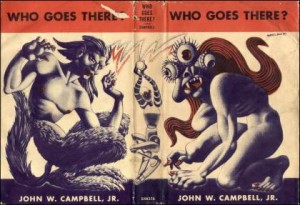 Long before a head detached itself from a body and walked across the screen, a meteorological expedition took place in Antarctica. In 1938 Science Fiction writer (and later editor of Astounding Science Fiction) John W. Campbell published the short story “Who Goes There?”. The story centered around a group of scientists, biologists, and meteorologists who studying the magnetic fields at the South Pole. When an anomly is discovered a group is sent out to investigate. What they find is an ancient alien ship with one of it’s passengers frozen outside the ship.
::Spoilers Ahead::
Realizing this is the scientific find of the century, the group takes the creature, entombed in ice, back to the camp to defrost and study it. Along the way the dreams of the men are invaded with malevolent visions of what this still unconscious creature would like to do to them, which some of the men pass off as just dreams. As the men take the creature (which all of them refer to as “that thing”) back to the barracks several of them have doubts on whether or not they should defrost it, in fears that it would be like fish that frozen and come back to life. The thing is described as being “unearthly and evil looking” with three big red hate filled eyes and blue worm-like creatures for hair that pulse and move despite being dead and frozen for over 20 million years.

What happens next is fairly predictable. The thing naturally comes back to life and tries to adapt to what it deems as the most logical organism to be able to survive the harsh climate of the Antarctic, the sled dogs. Of course the men destroy it, but still decide to study the remains of the creature. The tissue is still living and takes over one of the men, essentially bringing the creature back to life. It then eats each man taking over their appearance, and able to duplicate any living thing it devours.

The tale is clearly more science fiction than horror, as it talks in great detail on what the thing is and what it’s thinking. The inclusion of dream invasion and taking over another person’s form is a root method of many science fiction stories such as Invasion of the Body Snatchers. The thing is telepathic and is able to read and control the thoughts of the men, again another staple of science fiction of the times. Each piece of the destroyed creature is able to act like a separate entity with one purpose, while the original thing took over one of the scientists. That scientist isolates himself under the disguise of being concerned for the rest of humanity and tries to construct an anti-gravity device that would allow it to escape the harsh cold of Antarctica, only to be thwarted gallantly by the hero of the story.
Campbell wrote the story under the pseudonym of Don A. Stuart and first had it published in the August 1938 issue of “Astounding Stories”. It was later republished as a short book in 1948 and then again several times in several collections. It uses prose in some of the passages to describe the happenings, but is often named as one of the best most descriptive science fiction stories ever written. In the story Campbell describes a huge hulk of a man named MacReady, who he describes as a “forgotten myth” and a “man of bronze”. This has lead many fans of the Doc Savage stories to believe that this is actually a forgotten adventure of the “Man of Bronze” Doc Savage. A lot of comparisons are also made between this story and the H.P. Lovecraft story “At the Mountains of Madness”. That story involves dead creatures from another planet who are set on bringing “Cthulu” to Earth. That story was published just a few years prior and also took place in Antarctica during an expedition.
While it wasn’t defined as horror at the time, the story has morphed and took on several lives of it’s own as movies, video games and even theme park attractions.
This year the film inspired by “Who goes there?” are featured as two separate houses at Universal Studio’s Halloween Horror Nights in both Orlando and Hollywood.
For more information about The Thing:Assimilation at Universal Studios Hollywood including ticket details, visit the official website.

For more information about The Thing at Universal Studios Orlando, including tickets, visit the official website.

Tomorrow’s “Thing” you should know comes from another world.