The Dark Side of the Gardens at Busch Gardens Williamsburg

We have a report from our colleagues over at WorldWideBrian.com 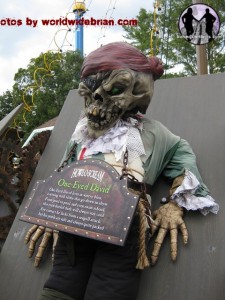 We were originally supposed to take in the event on opening night, but the weather put a stop to that. While the event did go on as planned Saturday Night and then this past Friday, Busch Gardens Tweeted that the park was at capacity, and you could tell it. The lines for all the houses were amazingly long and there were so many people trying to get their Howl O Scream fix.
There were several new houses this year, as well as a bunch of returning ones. The actors in the houses all did great jobs with what they had, and while some houses didn’t exactly thrill, they do have a lot of potential and quite a few weeks left to make some tweaks.
Catacombs: This is the best maze at Busch Gardens Williamsburg. The skeletons don’t really jump out at you, but they stare and lurk in a way that really gives you the chills. 4/5

13 Your Number’s Up: The line for this new maze was unbelievable, and that’s not a good thing. I would recommend going to this first, as it will probably have the longest line each night. This attraction is themed to your 13 worst fears. Most of the 13 fears were easily to identify, such as aracnophobia, claustrophobia, and the fear of the dentist. There are plenty of props and things that hang from the ceiling throughout this maze, which helps to make this one of the best at the park. Rating 4/5

Dead Line: This is the newly constructed maze that is located inside of the Pompeii building. The maze seemed long and unexciting, I almost felt like I was looking for the zombies instead of them looking for me. The metro station theme looked nice, but I’ve seen scarier people in the metro stations around D.C. Rating 2/5

Fear Fair: If they were to have a “state fair” in hell, this is what it would look like. You take a walk through the fair entering different tents along the way, each with its own surprise. This would have been a little scarier if we didn’t have as many people walking through the maze at the same time. Rating 3/5

Bitten: Not much to say about this one. This is the same vampire maze that has been at Busch Gardens for several years now. Not a lot of “scare” moments, even though it has the potential. Rating 2/5

The scare zones were all decorated nicely. People really seemed to be scared of the evil clowns in the “Grin and Scare It” area. I guess clowns really are one of the number one things that people fear the most. Throughout the rest of the park you could see some new “mascots” tied down to planks, as if they were going to jump out. A cool idea would be either to have someone in the suits, or to have these things be animatronics. Still it has a lot of great photo ops.

New this year at Das Feshaus was Fiends, which was wonderful. This show has been a staple at Busch Gardens Tampa for 12 years and is always the same. This one has just enough differences to make it unique. It’s also a huge success. The offbeat Dr. Weirdstein (In Tampa it’s Freakenstein) is working on his latest invention. I have an idea with this show, and hopefully the good people in creative hear me. Instead of having the same story line year after year, make it more along the lines of the Bill and Ted show at Universal Orlando. Have the key elements be the same, the naughty nurses, the good Doctor, all the normal stuff, but let’s rotate different story elements and pop culture icons. It would be a blast, and it would never get stale. The sexy nurse outfits seem to be a real hit with the park guests. They also have the nurses outside of the Festhaus selling rum shots for $10.00. If you buy one the nurse puts the plastic needle into your mouth and feeds you the rum. This is a definite new realm for the park as they have always served beer, but never liquor. It seems that the park is definitely drifting further away from the family friendly event, and going instead with a more hard core adult party.
More HOS pics:
[flickr-gallery mode=”photoset” photoset=”72157627812974492″]
Overall the event was great, though the scare zones were all too crowded to get a good look at. Here’s a tip for anyone looking to go: Do Friday and Sunday nights as the park is really crowded on Saturday. We’ve been hearing loads and loads of rumors that the event will turn into a separate ticket event within the next year (meaning you’ll no longer get Howl O Scream for free) and actually with the amount of people the event draws in, it’s not a bad idea. It would definitely limit the amount of people who go to the event at any one time at first. Eventually if the park keeps up with this level of detail in the houses and zones, it will quickly become a must see event from all over the country.
For more information on Howl O Scream at Busch Gardens Williamsburg, visit the official website.