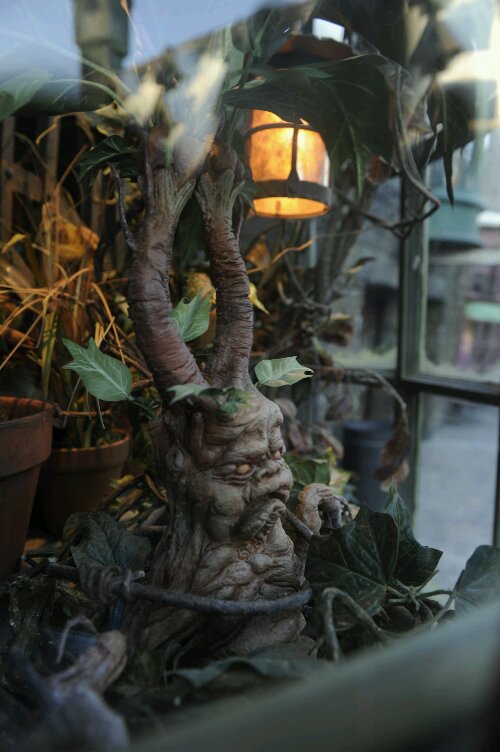 The Wizarding World of Harry Potter was a huge success for Universal Orlando. In keeping with the magic of the area Universal Orlando is releasing a series of pictures that tell a little more to the story.
This month we look at the Potted Mandrake. When you stroll through the streets of Hogsmeade the Windows quite literally come to life.
From Universal

The Dogweed and Deathcap storefront in Hogsmeade at Universal Orlando Resorts The Wizarding World of Harry Potter is home to many exotic plants and flowers, including the potted Mandrake. Shown within the shop window, the Mandrake shrieks and squirms as guests pass by. Inspired by J.K. Rowlings compelling stories and characters, The Wizarding World of Harry Potter is the most spectacularly-themed entertainment experience ever created.

For those familiar with the story of Harry Potter you’ll recognize the Mandrake as bebop the key ingredients of Harry Potter and the Chamber of Secrets. In the book, and movie, the Mandrake was a plant that was used to cure petrification. Victims would be petrified if they caught a glimpse of the terrifying giant bassilisk, the beast hidden in the chamber of secrets. The Mandrakes themselves are also dangerous as the scream from a juvenile could knock you out, and the cries of the adults could kill you. While the plants are dangerous in the movies, its perfectly safe and a fun part of the Wizarding World.