Worlds of Fun Haunt gets ready for the last scare

Like many of the other Cedar Fair family, Worlds of Fun in Kansas City Missouri, is kicking their Haunt event into over drive for the last weekend. Over the past few weekends they’ve been featuring several kids fun by day, and of course Halloween haunt goodness by night. 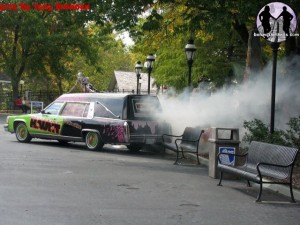 With nine haunts it definitely seems to have a lot of potential for some great scares. But how does the park define a haunt? Are they houses, or scare zones, or a combination of the two?

The park’s haunts are

The event also boasts six shows, one of which being a coffin simulator ride. I’ve seen this before at the Spooky Empire convention, and it’s not something that would seem like you’d enjoy it. They put you in a coffin and make it sound, feel and smell like what it’s going to be like when you die. Trust me friends, every day above ground is a good one.
The other interesting thing is “Half Pint Brawlers”. 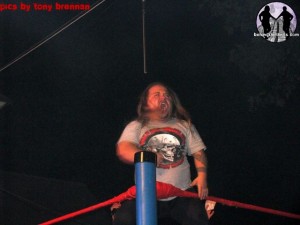 That’s right kids, midget (or little people) wrestling. I don’t know what it has to do with Halloween, or why a family theme park would want something so hard core violent and bloody…but it seems like a fun time, and something you just have to see to believe.
More Worlds of Fun pics courtesy of Tony Brennan
[flickr-gallery mode=”photoset” photoset=”72157627862148575″]
For more information, including tickets visit the official Worlds of Fun website.
TAGHalloween 2011 Haunt Worlds of Fun
Previous PostSecond annual Thrill Weekly Poll returns to name "best of" 2011 Next PostChanging Halloween-Could it affect Haunt Season?