I know I’m about a week late with this, but haunt season this year has just been that busy for us. So many great reports and pictures from all over, as well as an unprecedented number of trips to our haunts here locally, made this year one for the history books. Which was your favorite haunt? Did you go all in for Lady Luck? Perhaps you walked on the Dark Side of the Gardens? Maybe you did some others? The fog is fading fast, but before it recedes into the night for another year, let’s look at what we really liked, and talk about what we might see next year.

Of the major events we attended this year, this was the favorite. All of the houses worked great, looked great and had a great amount of scares. Even the houses that were at the bottom of the list, were still pretty damn good. 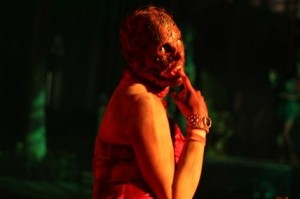 The scare zones were super small this year, but packed a punch. When they worked, they really worked. When they didn’t, well….it was kind of flat. It seemed like it was all about flow of traffic, and you had one side of the park that was packed, and another side that was dead. The shows, too, were hit and miss. Bill and Ted was Bill and Ted, and it was pretty damn good. The changing aspect of the event was pretty innovative, and very welcomed. It’s something that hasn’t been beaten into the ground yet, but give it time. Crowd levels were insane, it’s been an ongoing problem for many years now. But how do you limit the crowds? One alternative is to limit the alcohol, that will drive the party crowds away. Another is to enforce an age restriction…no one under 13…at all. Even another is to limit the amount of people in the events…None of which will ever happen. It’s just the price you pay for a successful event.

Halloween Horror Nights is going on year 22 in 2012. Ever since the event went to two parks in 2004, audiences have been clamoring for it to happen again. Even more, audiences want the event back at Islands of Adventure. But let’s me completely honest. It most likely will never happen again. Two big reasons- Seuss Landing and Harry Potter. It’s fairly common knowledge that the widow of Dr. Seuss has a clause that states there can be no scary events in that area. There is most likely a similar clause with J.K. Rowling. It would be counter productive to have two areas of a park that you have to keep closed in order to have a big time event. Keep hoping, it may happen…but it’s not really likely.

Howl O Scream-Tampa
Tons of people liked this event this year. I wasn’t a fan. The new houses were great, the actors did their best, it just felt all too familiar and fell flat for me. It must have been when we went, but we missed all the “roaming hordes” and therefore the streets felt empty. Granted, we could get all the houses done in less than two hours…as well as eat and watch a show. The lines during the week, from what I’ve been told, were non existent, and the only night where lines seemed to be a huge problem were Saturday nights. The shows seem to be stepping up a bit, and I’d like to see them continue that trend. Of the two big shows this year, The Midnight Hour won me over more than Bill and Ted because it took some bolder chances. Fiends should be the show that parodies pop culture…but it’s Fiends. It just kind of wouldn’t be Howl O Scream without pink haired big boobed nurses and horny ass Igor.  Still, I’d like to see Howl O Scream take more chances and get the budget they need. I can’t tell you how many people I talk to say “Well…if HOS had the budget HHN did….”. I’m tired of that statement, it feels like a cop out. So let’s open that budget and let the creative minds have at it.
Predictions/Rumors
This is the third year in a row that I’ve heard “Howl O Scream isn’t coming back”. I’m calling BS on it right now. Howl O Scream will come back. You do have to wonder how much of a dent on the event (and the park) Legoland Florida will have on it though. Less than an hour away from Orlando, it may draw families next year with “Brick or Treat”, which could put a dent in it with families opting to stay closer than coming to Tampa.
What could happen
Busch Gardens Williamsburg
This park really stepped it up this year. They increased the scares, the chainsaws and sliders and brought sexy back. They’ve also been introduced to the nurses of Fiends, and Jello Shots….they will never be the same again.
Predictions/Rumors
That wraps up our coverage of haunt season 2011. Keep in mind that everything listed in the “Predictions/Rumors” sections are just that…predictions and rumors with no basis to go on other than hearsay, speculation, and rumors. Until the park says otherwise, it’s just a fantasy hatched in my head to entertain you.
Check out our pictures from our last visit to HHN:
[flickr-gallery mode=”photoset” photoset=”72157627946194099″]
TAGBusch Gardens Tampa Halloween 2011 HHN 21 Howl-o-Scream
Previous PostDisney Ices the Castle for the Holidays! Next PostThrill Weekly Poll-Best Social Media Presence