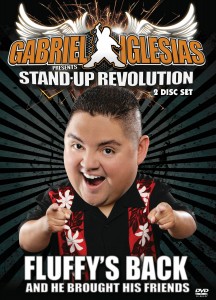 This week’s Offsite Adventure-Gabriel Iglesias Presents: Stand Up Revolution on DVD
Gabriel Iglesias is a man after my own, unhealthy, overweight heart. I’m not saying Gabriel is any of those things, but he is what he is and embraces it. In October Comedy Central aired Stand-Up Revolution, which was seven weekly episodes of 22 minutes of some of the funniest stand-up comedy in ages. Gabriel Iglesias stole the hearts of the nation on Last Comic Standing and has kept going strong and never slowing down over the past few years. He’s one of the hottest guys in comedy right now, and he’s using that to his advantage. No, he’s not pulling a Larry the Cable Guy and making a string of crappy ass movies. He talked Comedy Central into letting him host his own show, and fill it not only with great Latino comics, a Grammy Award winning band, and some of his friends, but also comics of all races, colors and creeds that are just damn funny.
Relates to Theme Parks How?
Gabriel Iglesias is not only headlining his own T.V. show and tour, but he’s also going to be performing at Busch Gardens Tampa’s very first Senior Grad Bash. Plus, the guy loves theme parks. He’s talked about them several times in his routine.
Details
If you missed the Comedy Central episodes of Stand-Up Revolution, never fear. You can now purchase the DVD for your very own. The 2 disc set features all 7 episodes. But they are extended episodes, with uncensored footage not seen in the original episodes. In addition the DVD includes outtakes, and the music video “Hey It’s Fluffy!” performed by Grammy Award winning band Ozomatli.
httpvh://www.youtube.com/watch?v=m2zeUivkBr4

The DVD will be in stores November 15th. It’s definitely a must have for any Gabriel Iglesias fans as it’s packed with new material from not only him, but also Martin Moreno, Rick Gutierrez, Alfred Robles, Shaun Lathem, Joey Diaz, Thea Vidale and Dillion Garcia. You can also purchase it online by going to the Official Gabriel Iglesias website (click here!).

Still there? Well, for being good little minions I have something special for you. You can win a copy of the new DVD “Stand-Up Revolution” from us, but only if you follow us AND Gabriel Iglesias on Twitter. Ready?
It’s simple, follow @BehindThrills and @FluffyGuy on Twitter and simply tweet this message

For those not on Twitter, we have something for you. For our Facebook followers we will give you a chance to enter. Just post this as your Facebook status “Win the new Gabriel Iglesias Dvd from Behind The Thrills! Visit the link and win! http://t.co/nHMsuVSV ”
You must be a fan of Gabriel Iglesias AND Behindthethrills on Facebook, and you have to rag us both in the post. It’s easy!
You can enter once a day, simply by tweeting. Enter daily, and get more chances to win. We will draw the winners next week!

Go to the official Gabriel Iglesias website for more information on the DVD, tours and other great merchandise.