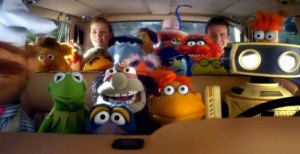 Over the holiday weekend The Muppets returned to the big screen in a fun romp that showcased all the magic that seemed to be missing from the previous installments. In the film Jason Segel and Amy Adams play a couple who, along with their Muppet friend Walter, come across the Muppets studio which is in extreme disrepair. Through a series of plot twists, we learn that the studio is going to be leveled in order to get at the oil under the land. A sad end for something that has given our three friends, especially Walter, so much joy and laughter. It becomes the mission of the three to reunite the Muppets and do one last show to save the day.

I really wanted to love this movie. I tried to stay away from spoilers. I really tried to stay calm when I saw interviews with the gang, even though I wanted to squeal like a giddy little school girl. I love the Muppets. LOVE THEM. I get teary eyed when I hear Rainbow Connection because it takes me back to a time when there was so much less trouble in the world. Imagination was the key to solving problems, and anyone could be the master. The only people who truly understand what I’m talking about are the lovers…the dreamers…and me. It was pure and simple magic that had all of us captivated. Disney could come close, but it could never overthrow the magic and wonder that were the Muppets.

Fast forward a few years, past a string of terrible films where the magic was gone and the name was only used as a cash grab. Jason Segel, a true fan of the Muppets comes up with this amazingly great idea. It meets opposition at Disney (because they’ve been losing money on the Muppets for years) and gets reworked and rebudgeted. We get “The Muppets”.

In this version the Muppets have disbanded and come together when one their superfans brings to their attention that the old theater that they did the Muppet Show in is going to be torn to the ground. The leader of the movement is Kermit. I love this frog, but he seemed so just worn out. He looked like life had been very hard on him, and that he really would rather just walk away from it. Being the ever loving performer, he can’t let a fan down and agrees to get the band back together to raise a ton of money.

It felt wrong. It felt like Kermit was just there because he had to be. The rest of the gang, Fozzy, Rolph, Piggy, and of course Animal were all happy to be back together and had tons of eclectic energy. Even Gonzo has a great moment, where he strips away the life that he had made for himself to return to the roots he so loved. But Kermit, who for me was the heart and soul of the Muppets, seemed like his magic was gone.

Because of that, the whole movie was just not as magic as it should have been. It was very enjoyable, and it was definitely a better return than had been attempted before, but it just wasn’t my same old Muppets. I guess we really can’t go home.

Still, with my minor disappointment, the movie is still a worthwhile entry into the Muppet saga. It’s a Muppet movie that has the problems of the world with it. But at the end of the day (and at the end of the film) it’s still a Muppets movie, and the world is a better place now that Muppets are a part of life once again.