Offsite-The Ups and Downs of Thanksgiving 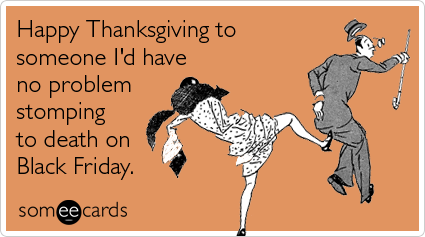 Thanksgiving is a holiday steeped in tradition and a lot of celebration. It was first celebrated in Plymouth by the pilgrims in 1621 in which they famously bonded with Native Americans for helping them. This first day of Thanksgiving laid the foundation for what would be practiced by individual colonies in the U.S. and Canada. It wasn’t until 1863 that President Abraham Lincoln made Thanksgiving an official holiday in November, making it the last Thursday in November. It was after all a time for all families to get together and have peace, and be thankful for what they had throughout the year.  In 1936, President Franklin Roosevelt moved the holiday up one week to try and stimulate holiday shopping during the Great Depression, but in 1941 signed a bill that made it officially the 4th Friday.

Today Thanksgiving is seen primarily as the start to the holiday shopping season, and the busy Christmas season everywhere. It’s also a day of great football, and gathering at theme parks to celebrate. It’s been all of these things for years. Stores like Walmart have remained open, giving people a place to grab things they may have forgotten. Movie theaters have always been open Thanksgiving night, while movie studios roll out their biggest films on those days. It’s been like this since I’ve been a kid. It’s gotten a lot bigger, with more and more stores opening, and the holiday shopping starting a lot sooner.

This year there are several retailers that are starting their big holiday sales Thanksgiving Night. In fact, this is a trend that started about ten years ago with K Mart. Stores like Walmart are starting their huge sales at 10p.m. while Best Buy and Target are starting at midnight. This leaves those working the stores having to come in on Thanksgiving Day a little earlier. Because of this tons of petitions have sprung up this year alone calling retailers names, and accusing them of ill work ethics and chasing the almighty dollar.

I’m not going to pretend that I’m above all this. I will be lined up as early as 8p.m. at my local Walmart trying to get some great deals. I have to. I raise two kids, and have had my pay cut by 10% this year. No…this fun little website is not my job, no it doesn’t pay the bills. Like so many others in this country I work a job that pays less than I need because it’s what we have. It’s steady. And being that it’s steady, I have to cut corners where I can. So therefore I will line up. But I’m not complaining about the lack of family togetherness. I get family togetherness year round. I urge all of you to do the same!

If you really have a problem with all the sales, the one simple solution is to speak with your wallet and not show up for ANY of the sales. I’m not talking about waiting until 5a.m. I’m talking don’t go shopping on Black Friday. Wait until Cyber Monday for a great deal, or shop early. To prove a point you may have to make a sacrifice. But most importantly, let your families know you love them all days of the year. Take a little bit of extra time on Thanksgiving and enjoy, but let the love of the day fill your heart year round!