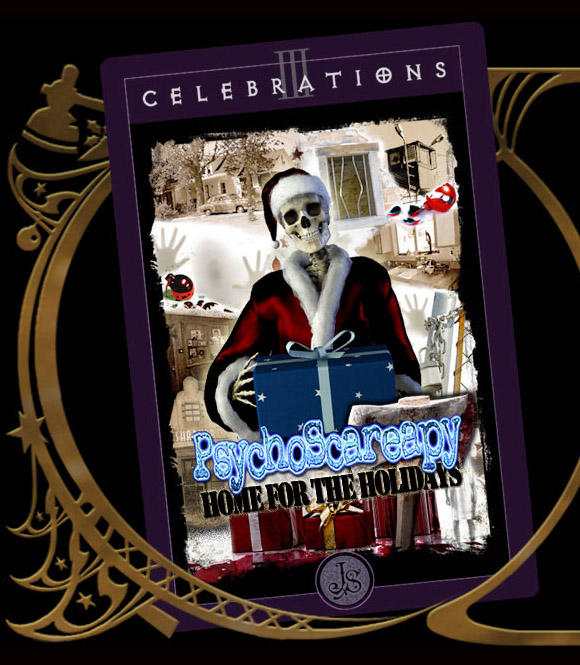 11 Days til Christmas-Phsychoscarepy:Home for the Holidays
-Ah the most wonderful time of the year! No..I meant the other most wonderful time of the year. Haunt Season. While this entry in the calendar is a little offbeat, it’s still a necessary part of Christmas. The major holiday before Christmas is of course Halloween (yes, Thanksgiving is in there, but it kind of blends together and starts the Holiday Season so I’m giving Halloween the major title). But what better way to gear up for Christmas than to have a Christmas haunt? Enter Pyschoscarepy:Home for the Holidays. This house was part of HHN 17, and was originally going to be called “Silent Night, Pyschotic Night” or on some shirts “Black Christmas”. Much speculation surrounds what happened, but the end result is…who cares! What we got was an amazingly detailed fun house that tells the story of a group of patients from Shadybrook Asylum, who are not supposed to be let out of the hospital. They are, and cause a bus crash right into a residential neighborhood on Christmas. The results are bad. Flesh cookies, crazy Santa with a chainsaw, and Chet’s nuts roasting on an open fire.
httpvh://www.youtube.com/watch?v=QhIu0hmbg_E
Several little nods to Christmas classics were included in the house, such as an amputated bloody leg in a fishnet stocking with a lampshade, and a kid with one missing eye. Fun stuff!
It’s also the subject of one my favorite HHN stories, in which I became pantsless in said house.
Story goes like this: My dear friend, Bsquare, and I were going through the house with his then girlfriend “Closet Freak”. Freak was afraid of all things horror, and still is…though she works at Howl O Scream. She’s a runner, a screamer and a hider. I was walking in front of Bsquare and Freak, and she was screaming and freaking out…going very slow. Bsquare, not being the most attentive of boyfriends, was busy paying attention to the detail. In one scene you see a bear skin hanging on the wall, in a living room. You then go around a corner around a recliner. In the bear skin was an actor, and on the opposite side of the recliner was a couch with a scare actor holding a head. The bear skin guy peeks out, I motion behind me and proceed around the corner…where I stop because of the line. The actor pops out of the skin, which sends Freak running dragging poor ole B with her. She hits the recliner which pops open, and stumbles trying not to fall. The only thing that she has to grab onto is me with my back to them. She grabs, but the only thing she catches is the back of my pants. Down they come, off they go, and there I am standing in the middle of Pyschoscarepy with nothing but a weird smile on my face. The actor in the rug was losing it and falling out of his hole because of the laughter, and the actor on the couch kept rocking back and forth repeating “must stay in character, must stay in character.” Rather hilarious, and I learned that belts are always a must have accessory at HHN.
Merry Christmas!