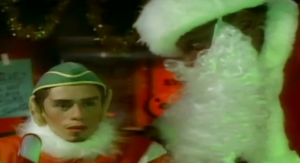 12 Days til Christmas-Christmas in Hollis
Released in 1987 as part of two compilation albums, Christmas in Hollis became not only a landmark in Rap, becoming one of the first Rap songs to achieve commercial success, but also a holiday favorite.
httpvh://www.youtube.com/watch?v=OR07r0ZMFb8&ob=av3e
Run DMC did the song with producer Rick Ruben, and it was prominently featured on the album “A Very Special Christmas”, the proceeds of which went to benefit the Special Olympics.
The video has immortalized the song with a crazy elf, and an unconventional Santa and reindeer.

TAGAdvent Calendar Christmas 2011
Previous PostBored in line at a park? Pick up a copy of "Things to do in Theme Park Queues" or download the app! Next PostErik's Advent Calendar-13 Days til Christmas!