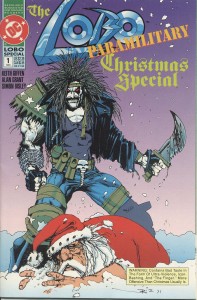 “Seriously suggested for mature readers”. “WARNING: Contains Bad Taste In The Form Of Ultra-Violence, Icon-Bashing, And “The Finger.” More Offensive Than Christmas Usually Is.

Those are the words of warning blazoned across the cover of DC Comic’s anti-hero comic book “Lobo-The Paramilitary Special”. To understand the twisted, unadulterated goodness that is Lobo Vs. Santa, you first need to know Lobo. Lobo was created as an anti-hero in the vein of Wolverine, Deadpool and The Punisher. Actually, Lobo was more of a parody of those characters than anything. His origins are not really important. What is important is the fact that he is a seven foot tall blue alien that rides a space cruising motorcycle. He’s a bounty hunter, a mercenary, and the main man. He’s fought the Justice League, including Superman and Batman. He crossed over and fought Wolverine..and would have won had not the fraggin fans of that long finger nailed pansy voted different. He is crude, crass, vulgar and ultra violent.
It’s no surprise that the Christmas issue would find a drunk Easter Bunny trying to hire Lobo to kill Santa. EB is extremely pissed off that all the children love Santa. He figures that if he kills Santa, he can become the King of the Holidays and be loved by all. Lobo, who never really needs an excuse to pop a cap in anyone (just money), takes the job and proceeds to just paint the walls of the North Pole with the blood of innocent little elves…who try their best to fight off the “Naughtiest One”.
In the end, it’s a fight to the death between Santa and Lobo. Yes, Santa is an old man…but not the jolly toy bringer. No Santa, is a seedy, fat, drunken thug. He has a gorilla body guard named…wait for it…Kong. After making short work on the monkey, Lobo goes after Kris “The Krusher” Kringle. The story ends with Lobo lobbing off Santa’s head and popping Rudolph. He then gets a hold of Santa’s Naughty and Nice list and goes around dropping A-bombs on towns around the world. Lobo is a naughty bastard.
While not your traditional bit of Holiday Cheer, it is a fun romp for those who love a little twist to their Christmas. It’s so much fun to read, but even more fun to watch as an independent film maker made a short film about the whole fiasco:
httpvh://www.youtube.com/watch?v=t9ooZYjF0mI

It’s not Christmas goodness, but hey, we can’t all be fraggin jolly old elves can we. Hell no.