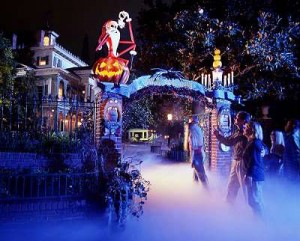 It t’was a long time ago, longer now than it seems. In a place perhaps that you’ve seen in your dreams. The attraction of which you are about to be told, takes place in the Disneyland of old. Now you’ve probably thought that a holiday lay over of a classic Disney attraction sounds like a lot of fun. If you haven’t…..I’d say it’s time you begun!

Boys and Girls of every age. Wouldn’t you like to ride something strange? Come with us and you will see, a Christmas ride based on Halloween!

The Nightmare Before Christmas was one of those weird movies that just clicked for me as a kid. It was dark, broody, kind of demented and heart warmingly fun. It was a film based on a story by Tim Burton, and it had his mark all over it.

A holiday theme was wanted for the Disneyland Haunted Mansion. At first imagineers wanted to do a retelling of “A Christmas Carol” but thought it wouldn’t fit in with the attractions New Orleans theme and creepy scenery. The park had already successfully brought in Christmas overlays for Country Bear Jamboree and for It’s A Small World. But who would live in a creepy mansion and have Christmas fun if Santa Claus stopped by? Jack Skellington and the gang from Nightmare Before Christmas were awakened from their slumber and the Haunted Mansion Holiday was opened in October of  2001 to rave reviews. It’s been a part of the Holidays at Disneyland ever since

A lot of the storyline and props from the original mansion had to be reworked, which posed a problem. Two of the main voices in the attraction had long since passed. For the voice of the “Ghost Host” Disney tapped Corey Burton for the disembodied voice. The original Ghost Host was Paul Frees. For the Madame Leota, Disney used the daughter of Leota Toombs, Kim Irvine and the voice of Susan Blakeslee.

The soundtrack also uses mixtures of songs from the movie, the original attraction and traditional holiday songs to create a complete transformation. The Haunted Mansion shuts down for two weeks every September to make the transformation, and runs from late September to Early January.

A version of the attraction was planned for Florida, but was cut due to budget and concerns that the International visitors wouldn’t recognize the character. The props and pieces were then flown to Tokyo where they are used to huge success.