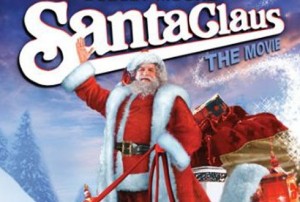 22 Days til Christmas-Santa Claus:The Movie
Santa Claus is the magical stuff that legends are made of. From his beginnings in folklore, to his role in the Christian Church, to his legendary yearly rides pulled by reindeer, Santa has become THE staple in the modern Christmas story. In 1985, Santa made it to the big screen along with Dudley Moore and candy canes that made kids fly in “Santa Claus: The Movie”.
The movie was everything that kids had hoped for in the 80’s. Musical montages, crazy special effects, fart jokes and an ending where everything turned out okay. Santa Claus told the story of “Claus” a woodcutter that delivered toys to children. He and his wife get caught up in a storm and they are whisked away to the North Pole. There they meet elves who tell him they were waiting for him, and reveal to him his destiny of having to take toys to kids all over the world.
Fast Forward to the 20th Century and we have Santa getting bogged down by the ever growing population in the world and feeling pretty tired. Through some high jinks and clever plot holes, Santa meets a homeless kid named Joe and invites him along for a ride.
httpvh://www.youtube.com/watch?v=6hbX_fRgzqk
Okay, so it’s not a great movie. In fact it was a complete bomb at the box office. The story and plot were really terrible, but then again looking back, most Christmas specials and movies we liked as a kid were terrible. Yet, it’s still a fun film to watch every Christmas with the family.