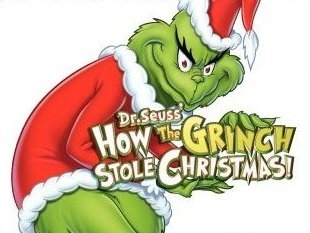 4 Days til Christmas-Dr. Seuss’ How the Grinch Stole Christmas

Every Who down in Who-ville liked Christmas a lot, but the Grinch who lived just North of Who-ville did not. The Grinch hated Christmas! The whole Christmas season! Now, please don’t ask why. No one quite knows the reason.It could be that his head wasn’t screwed on quite right. It could be, perhaps, that his shoes were too tight. But I think that the most likely reason of all May have been that his heart was two sizes too small.

Thus starts one of the most beloved childrens books of all time. Let’s forget the Jim Carrey abomination that they called a movie, the Dr. Seuss book explores themes of anger, revenge and redemption, all in the name of Christmas. Pretty heavy for a children’s book. It stands, again, as one of the most popular children’s books..not just for Christmas, but of all times. It was then made into an animated special in 1966.

The most famous part of the TV special was the addition of Boris Karloff, who played Frankenstein’s monster in the Universal classic Frankenstein. Originally Dr. Seuss objected the use of Karloff, fearing he would be too scary, but after first seeing his turn as the narrator timidly agreed. Karloff also plays the role of The Grinch, in which his voice was altered in post production to make it sound more gruff and grave.

The Disney connection in the TV special is Thurl Ravenscroft, who’s booming voice is heard in Disney’s Haunted Mansion.