The year is coming to a close, so that means that it’s time to look back at the favorite experiences of the year. Yes, it’s an annual cliche that none are exempt from. But in the world of theme parks, things are always fun to look at, and always fun to relive. So what were your favorite theme park moments of the year? Here’s mine. 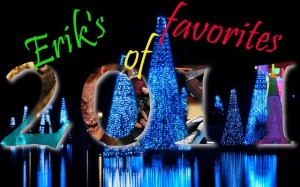 Now, before we go one step further, let’s not confuse this with the “Thrill Weekly Awards” or with any other major lists of 2011, this is completely my opinion. This is also my list…and while it should be simple to understand, this is my list…so my ball, my rules. If you don’t like it, I take my ball and go home. These are things that I liked the best from the theme park world, things that both Racheal and I experienced. Some are rides, some are announcements, but they all in one way or another have SOMETHING to do with the theme park world.

That’s the stuff I love in the theme park world in 2011. Other honorable mentions include Mardi Gras at Universal, Mickey’s Very Merry Christmas Party, Food and Wine Festival, and Bands Brew BBQ at Sea World. 2011 turned out to be a great year for theme parks, but just what lies ahead for 2012? Stay tuned to Behind the Thrills for all the latest.